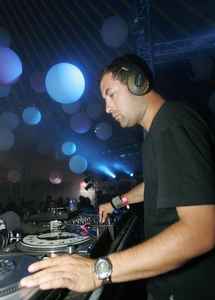 He is one of the most respected (and idiosyncratic) Techno DJ's and producers of the 90's.
Dave Clarke began his music career as a Hip-Hop DJ in the mid 80's, shifting to Acid House and later to Rave near the end of the decade. He began recording for Stress Records (as Pig City) in the early 90's and also appeared on R & S Records, XL Recordings and his own Magnetic North. By the mid 90's he had gradually shifted away from Rave to a brand of straightahead Techno with the ferocity of Hardcore yet the sublime feelings of classic Detroit Techno. A series of three 12's named Red 1/2/3 gained fame during 1993-96 (the last entering the Top 40 in the U.K.), as did his ferocious DJ sets.

September 30, 2020
Dave is a certified legend. I see him as a massive influence to my music tastes. Big ups x

September 13, 2015
Yeah as user 'Mirage2012' points out there's some nasty comments on this page that are really undeserved. Champion of proper techno and electro for a lifetime, you can't deny this man's passion and talent. User 'telwin5000' who comments on the Red Series that there "seems to be a timelessness to their dullness" and that he "can't wait to be rid of these records", really??!!! well... that guy must have been mistakenly given those records and obviously doesn't deserve them anyway... hopefully they can find a better home soon!

February 14, 2014
Theres some pretty scathing reviews on this page of an artist who I believe deserves our upmost respect in the world of Techno. Dave Clarke has pretty much tirelessly supported the pure techno sound for over 25 years, first through his own heavy productions on his imprint Magnetic North (which released some absolute classic early 90's techno - check Woody Mcbride' Rattlesnake or DJ' Hell's Like That) as well as blistering DJ sets at infamous techno clubs like Eurobeat 2000.
The Red Series has been spoken about much here already, but its impact was huge. Along with peers such as Jeff Mills, UR, Robert Hood, Basic Channel and Luke Slater , The release of the Red series saw the move of Techno back away from what was becoming increasingly fast "european"and Trancey back to its Detroit and Jackin Chicago roots. Red 2 (in particular Wisdom to the Wise), Jeff Mills Waveform Transmissons 1 and 3 and Hood's Minimal Nation, all stripped down, raw and with an almost understated production completely reshaped Techno, and reaffirmed its relevance and set a path and recedent for the 90's and beyond. The 90's and early 2000's saw Dave's meteoric rise to Techno Fame. Archive one (which features many of the Red Series tracks) remains an incredible album, and one of the first where Techno's early influences were also explored (hip hop beats, Electro etc.) to great effect. It remains a classic. Mixes such as "Live at Fuse" and the World service series, several blistering BBC essential mix sessions and a john Peel session as "Directional Force" proved Mr Clarke to be no flash in the pan.

Ferocious yet funky Dj mixes featuring his from this era stand right up there with Jeff Mills classic "live at the liquid rooms". Some more accessible and big name remixes did follow, often retaining a dry and dark sense of humour many do not credit Dave Clarke for, and the Album for Skint was a touch more patchy that Archive one.... nonetheless, some real classic can be found such as the DJ Rush Collaboration "way of Life". 2000's "before I was so rudely interrupted" was one of the first piece's of music to get a "digital" release way (unfortunately) ahead of its time, yet again it remains a blistering and timeless track for the discerning Techno Dancefloor. The 2000's has seen Dave Clarke take a step back on his solo production but keep pushing and promoting techno, past and present. Support for his International peers and new artists continues through his long running White noise Radio show. His recent "solo" remix of Marcel Fengler brings back that raw Jackin sound that Dave is famous of showing that he still very much has it and is completely relevant to this day. DJ'ing wise....Im not sure i ever heard Dave Clarke play a set that wasn't completely uncompromising....and thats between 93 and 2013. Small dark venues or large festivals, you will never hear that plink plonk soulless rubbish being pedalled by many of Techno's once great masters...its full on, dark, futuristic, massively energetic and guaranteed to move anyones souls, hearts and feet. Dave doesn't outwardly "smile much" while performing...I like that ...in a world of hands in the air super DJ's playing chart music in naff super clubs general rubbishness in live performances, and where "artists" wear ridiculous "mouse heads" to get noticed, Dave Clarke's remains a "serious" artist and passionate DJ and Artsist (and a really approachable and pleasant guy actually). Legend is used so much today, but here is a genuine legend in the global techno seen. We Salute you Dave Clarke !
See 2 replies

April 19, 2013
Red 1 and Red 2 should be credited as the two Techno tunes which actually changed the face of UK dance music in clubs just after the demise of the illegal rave scene and hence by default, the world wide scene because at that time the Uk was undoubtedly the driving force in out put and originality across all genres. Those releases were a bit before my time but I have spoken to many DJs and without fail they all remember those two tracks blowing up more than any other record they have played. They were a phenomena is how one DJ put it. From the time of those records I knew this scene wasnt going to be a blip is how another one put it.

Clarke isnt just about the red series. Apart from a mere handful of dubious releases all his out put has been absaloutely sterling. But like many producers of his age and era, he has slowed down his production side, concentrating only on the DJ side, where of course there is much more money. But I think this is an error. At 45(ish) and having toured the world for twenty years surely there's enough money in the bank. Time to get back in to the studio and make some music. Let the highly overrated Richie Hawtins of the world covet the chin stroking press as they stick their faces on products (I mean that guy hasnt made a decent record since 93) whilst you produce that album you always wanted to.

April 16, 2013
After 1999 as you can see he ended up doing a few releases for Skint Records, enough said.
before 1999, it was techno by numbers join the dots stuff as far as i was concerned. For a while he was one of those producers who i felt i had to like for some bizarre reason. the red series is funny. had/nt listened to them in years but put them on the 1210 had a listen and there seems to be a timelessness to their dullness. Cant wait to be rid of these records out of my collection

December 26, 2012
I've really enjoyed seeing Dave play. I still cane his essential mixes from 94 and 95, and have fond memories staying up with friends to catch the BBC cover slot he did for annie nightingale in 97. The Electroboogie and Fuse comps he put together are amazing.

However, most of his tracks sit at the bottom of my record shelf, in the awesome 90s techno section. What happened after 1999?

I've seen this man play a few times at this stage, and I have to say that now, he really can't compare to the firat time I saw him. Personaly, I think this is more down to the places I've seen him. In the redbox in Dublin, it was interesting, if a little mediocre. At The Point, he was playing for the crowd which seemed to be more the younger kind of chart happy type (they definately didn't expect the Electro-crazyness that he was pulling off).

But when I saw this man playing in the tiny club/room that is the tivoli on New Years Eve 2002/2003, it was the highlight of my clubbing career... Quality tunes all night long, which stopped for about 3 seconds in the countdown, then he broke in the new year with the most amazing beats I've ever tasted. All the way through to somewhere around 4 in the morning.
Dave Clarke is one of those guys who will rise to the occasion. If you give him a crowd of chart loving kids, he'll play a set which won't be all that surprising, however, if you can see him at a smallish venue where the crowd know what they're looking for... Well, then you'll dance your way out of there wondering what happened to you, and you'll be one happy camper...

June 1, 2004
Dave is talented, yes.
But with the time he has become lazy and bored behind the decks as his superstar DJ status grew to nonsense.
I have seen him play 6 or 7 times (in few years intervals) and I have witnessed the difference.
The very first time I saw him play was at Fuse about 8 years ago. I was amazed at his talent behind the decks.
The last time I saw him play was at I Love Techno, and he was playing with all knobs and buttons, doing awful things, stopping and scratching his records like a 2 year-old-child could do. Maybe 2 or 3 records were well mixed on his whole set, the rest was crap. But the crowd was mad, because even if it was really ugly, that was Dave Clarke playing.
I recently read an interview of him in OutSoon (a free clubbing-oriented Belgian magazine) where he stated that he is bored of touring in the whole world, he has seen everything a man can see, played in almost every big club on earth, and he can play absolutely anything he wants (really anything), people will just love it because it's Dave Clarke playing.
In short, this man is bored of what he does and communicates it very well.
Oh, and I have NEVER seen him smile.
See 1 reply

May 10, 2004
Dave Clarke is a good artist if you want to take people out that don't like techno. If however, if you like techno I recommend something more underground with less kiddy special effects - reminds me of "My First Sony" great as an itro but not professional standard.