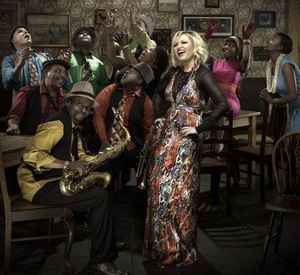 Profile:
Hugely popular South African multiracial afro-pop crossover band, founded around 1983 and still active, albeit with a reduced and changed membership. At their peak they could boast some eleven members.

Mango Groove's career has spanned an exciting and turbulent time in South Africa’s history. Since its first iconic multi-platinum release in 1989, the band, together with its charismatic lead singer Claire Johnston, has gone on to become a household name in South Africa. Mango Groove has a special place in the hearts of South Africans, and in terms of its airplay across all radio and TV stations, continues to be an act that truly reaches everyone, young and old.

Many people have tried to define the Mango Groove sound, and have resorted to a host of adjectives and phrases to do this: Kwela/Marabi Pop, SA Pop, Big Band Swing Pop, Eclecto-Pop, and so on. Certainly, the Mango Sound is a pop sound, aiming at simple and accessible songs, grooves and melodies and certainly it is eclectic. This eclecticism is primarily reflected in the extent to which Mango Groove has drawn on the rich legacy of South African urban music forms from the ‘40’s and 50’s.
Sites:
mangogroove.co.za, Wikipedia
Members:
Alan Lazar, Claire Johnston, Ed Jordan, George Lewis (10), John Leyden, Marilyn Nokwe
Variations:
Viewing All | Mango Groove
Mango Groove Girls