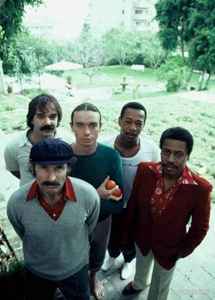 If you want some very well researched background on Weather Report, including a blow-by-blow account of each album, I recommend checking out the site www.weatherreportdiscography.org. (It's not my site, by the way; just a very excellent resource and eye-opening account of the band and each recording session.) It culls from interviews, articles and liner notes to provide one of the most comprehensive histories of any band that I've ever found on the web.

I would have to disagree with the original writer who said that nothing good came after 1976, and that Jaco being hired for Black Market resulted in the band's "creative high point." Recall that Jaco only played on two songs on that album ("Cannon Ball" and "Barbary Coast"), and contributed only one original composition ("Barbary Coast"). Yes, his influence was felt in those two songs, but one doesn't get the full force of Jaco's influence until Heavy Weather and the three subsequent albums. A re-listen to both the second Weather Report and Night Passage reveals some extremely creative stuff, even better than some of Heavy Weather.

Also, I agree with one commenter's statement that Weather Report was not a "supergroup," as the original writer suggested. Ever-changing styles and direction forced the natural turnover of band members. But Weather Report appears to be a supergroup solely on the fact that nearly all of its former members went on to achieve greatness in their own right - Vitous, Johnson, Mouzon, Acuna, Erskine, Hakim, Bailey, Alias, Walden - are all household names in the jazz world, but most did not attain their star status until after their stint with Weather Report.

In contrast, Weather Report is more of a lesson in how to be successful by changing with the times and adapting one's artistry to appeal to a broader audience without compromising the art, thereby lengthening the life of the group. For example, nearly all of Weather Report's "fusion" contemporaries at the time fizzled out after just a few years because they didn't change direction either quickly enough or drastically enough, or perhaps too drastically, to remain relevant. Groups like Mahavishnu Orchestra, Eleventh House and Return To Forever, although on-par with WR in technical prowess and creativity, stayed stuck in a particular style and watched the fusion world pass them by, with WP at the forefront. Zawinul may have been an egomaniac, but he was astute enough to not let his vision completely dominate the creative process - otherwise, Weather Report would have fizzled and been relegated to a lightning flash in the history of fusion like the rest.