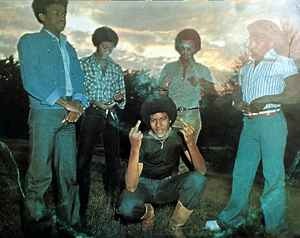 Profile:
Ofege was formed in the early 1970s by a bunch of teenage hippies at the prestigious St. Gregory's College in the Obalende area of Lagos Nigeria. Ofege was largely influenced by the guitar solos of Carlos Santana, Jeff Beck, Jimmy Page, Francis Rossi, and the criss-cross rhythms of Osibisa. At home, they were influenced by the music of ‘BLO’ (Berkley Jones, Laolu Akins and Mike Odumosu), ‘Monomono’ (led by Joni Haastrup), The Funkees, and Ofo The Black Company He also said "It's clear that for Ofege, songs were largely incidental, little more than excuses to launch into insane, distorted guitar solos. It's also very clear that they smoked a lot of weed." Their first album was recorded while the band members were still in high school (average age of 16), Ofege’s debut album Try And Love was originally recorded and released in 1973. Due to their vibrant combo of sweet harmonies, hooks & fuzz, they would become one of the most legendary Nigerian groups of all time, with expressive sales and national stardom.
However, with only four albums released until 1978 and no recognition outside Nigeria, Ofege’s short career would only be rediscovered with the turn of the century.

"Try and Love" was published actually before "The Last of the Origins". "Nobody Fails" continues in the same vain, with slight what I called post-60s harmony vocals (also especially “It’s not easy” has such vocals). Also here in this song the fuzz breaks out/breaks free, wild and uncompromising, while the rhythms in an African way are repeated and smoothly carry the song. Also here the bits of funky elements are completely dissolved in the psychedelic effect of all. The rhythms are complex and groovy.

"The Last Of The Origins" is a great funk-rock record with a rather psychedelic approach. The rhythm section is attractive and complex and has African inspirations. The songs themselves aren’t really great lyrically, but the drive is incredible, and everywhere they can they add attention to instrumental parts where the organ, in a psychedelic way takes care of mind-losing groove, while fuzz guitars soar and improvise. The vocals can be post-60s, a bit Stones like or just leave themselves flooding with the psychedelic drive.

It took some years before other albums appeared since some band members still had to finish university.