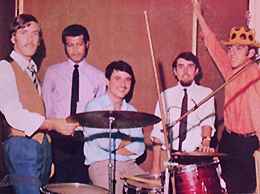 Profile:
Formed by students in Campo de Ourique, Lisbon, in 1963, they were originally led by their singer, Zé Luís (José Luís Moreira Lourenço). An important moment for the group came when they met Cliff Richard, who advised them to sing in Portuguese in order to distinguish themselves from other groups.
They started releasing records in 1965, hitting with pop fare like “Esquece” ("Forget It", in English), a cover of P.J. Proby's "Hold On". In 1966 they competed in the Grande Concurso Yé-Yé (Great Yé-Yé Competition) held at Teatro Monumental in Lisbon in 1966, ending up in fifth.
By the time “I Saw That Girl” (1967) was released, they were trying a song in English again, with good results.
Os Ekos went through lineup changes as several members left to serve in the military in Angola, and the group wrote some songs about the colonial war situation, some of which, like Sol e Paz, had their lyrics censored by the Portuguese dictatorship at the time. “Habitat 736” is one of these topical songs, their sixth and last record before breaking up in 1970.
Sites:
Facebook
Members:
Camilo Lopes Júnior, Edmundo Falé, Luís Paulino, Mário Guia, Tony Costa (7), Zé Nabo
Variations:
Viewing All | Os Ekos
Ekos