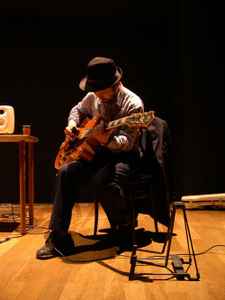 Taku Sugimoto started playing guitar when he was a high school student. At first he played rock and blues, and then he also became interested in free jazz, European free improvised music, and avant-garde classical music.

In 1985, Sugimoto co-founded the improvisational psychedelic rock band Piero Manzoni, whose main influences were The Velvet Underground and MC5. The group, including Masaki Bato on bass and Sugimoto on guitar, disbanded in '88. For the next few years, Sugimoto was involved in solo performance and session work. It was during this period that he released his first solo LP, Mienai Tenshi ('88), which had a big, heavy sound.

In '91, Sugimoto started playing cello, and for the next two years abandoned the guitar in order to focus completely on this instrument. He formed Henkyo Gakudan (which was active in '91-'92) with alto sax player Hiroshi Itsui and guitarist Michio Kurihara. The group's music sounded like somewhat high-volume improvised chamber music. Sugimoto was also briefly a member, in '93, of the psychedelic rock band Ghost, and in '94, of Tetuzi Akiyama's avant-garde classical music band Hikyo String Quintet. After releasing his cello solo CD Slub in '94, Sugimoto gave up the cello.

Sugimoto and Tetuzi Akiyama launched their guitar duo Akiyama-Sugimoto in '94. Since that time, Sugimoto has gradually shifted from a loud, heavy sound to the extremely quiet sound, full of silences, which he has established through solo and other projects as his own unique style. He has played frequently with Akiyama, Toshimaru Nakamura (guitar, mixing board), Yuta Kawasaki (analog synthesizer), Otomo Yoshihide (turntables, guitar, electronics) and others. Since 1998, together with Akiyama and Nakamura, he has been organizing an inspiring monthly concert, The Improvisation Meeting at Bar Aoyama (renamed The Experimental Meeting at Bar Aoyama in '99, and Meeting at Off Site in 2000), which he continued to organize until his retirement from the series in February 2001.