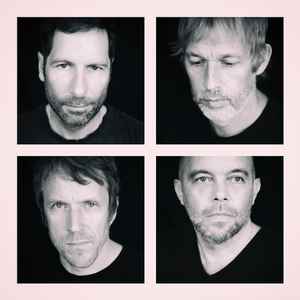 With their first records, Ride created a unique wall of sound that relied on massive, trembling distortion in the vein of My Bloody Valentine but with a simpler, more direct melodic approach. The shatteringly loud, droning neo-psychedelia the band performed was dubbed shoegazing by the British press because the bandmembers stared at their pedals while they performed. Along with their initial influence, My Bloody Valentine, Ride stood apart from the shoegazing pack, primarily because of their keen sense of songcraft and dynamics. For a while, the band was proclaimed the last great hope of British rock, but they fell from the spotlight nearly as quickly as they entered it.
Sites:
thebandride.com, ride.band, Facebook, instagram.com, Twitter, Twitter, Wikipedia, YouTube
Members:
Andy Bell (2), Loz Colbert, Mark Gardener, Steve Queralt

September 13, 2021
I saw Ride play in 1990 and they weren't even close to being "shatteringly loud" - they played at average gig volume; i.e nowhere near to My Bloody Valentine's usual 'fingers in ears' level. Not sure they "stood apart from the shoegazing pack" particularly either; they were briefly the most celebrated by the press, but they never really transcended the scene. Their popularity evaporated as shoegaze faded and they tried to develop their sound in other directions. Great band though, especially the early stuff.
Reply  See 1 reply Notify me 1 Helpful

August 21, 2021
If anyone reading this doesn't know the early 90's Creation records band Adorable, def check them out, you will NOT be disappointed.
Reply  See 4 replies Notify me 2 Helpful

They were a very exciting proposition when they first appeared with the self-titled EP in 1989. Very much influenced by "Isn't Anything" by My Bloody Valentine, their sound was noisy but more melodic, younger and brasher than The Valentines. Subsequent EP's carried on the build, Play and Fall (the drums on "Dreams Burn Down" were colossal) were more accomplished in their songwriting scope and sonics.

But their 1st LP was very much a disappointment compared to those EP's. The sound was thinner and less overwhelming. Andy Bell's snaking melodies had largely gone, replaced by more typical arpeggios and predictable chord sequences. Lyrically as well as sonically, songs were darker, more introspective, sad and tired-sounding. All in all, much less chaos to offset the melodies.

"Vapour Trail" was the obvious standout track, we'd already heard "Dreams Burn Down", so the rest was pretty uninspiring - although the sparser guitar tones did let more of the amazing drumming poke through in the mix!

The "Today Forever" EP was a welcome return to form, especially for the lush last track. They sounded much sunnier and upbeat than on the previous LP.

I don't know why, but from then on, Ride turned rapidly into a fairly standard British rock band, and lost most of the atmospherics and eccentricities that had made them stand out. They cleaned and streamlined their sound.

By 1994, they sounded like all the other Britpop pretenders. I guess they wanted to compete with Oasis, Blur and the burgeoning Britpop scene. We lost a magical scene as everything went horribly "Cool Britannia"!

Lush, Chapterhouse, Ride, Boo Radleys, Slowdive, The Pale Saints etc. were all lost in the aftermath of Nevermind's success and the onset of Britpop!

December 22, 2016
Beginning with the Smile LP, Ride set overdriven guitars to the hypnotic pulse of Fender vibrato and driven, loopy rhythms. Vocalists Mark Gardner and Andy Bell traded vocal duties, layering each with their richly melodic, atmospheric harmonies and creating the Shoegazer's signature contrast between jet engine guitars and almost deadpan vocals. The band's two minutes began in 1990 with the release of Nowhere, and rather than cow-towing to pop's quick, compressed conventions, Ride increased the throttle with phantom feedback and an elegant sort of rhythmic aggression for album's opener "Seagull." Still, the band didn't confine itself to volume tactics alone; they also showed great pop skills and a penchant for heart wrenching song craft with the album's touted hit "Vapour Trail." Ride continued to profile their structured pop brilliance (see "Twisterella") and jammy, Neo-Psychedelic swirl until their demise in 1995.
Reply Notify me 3 Helpful