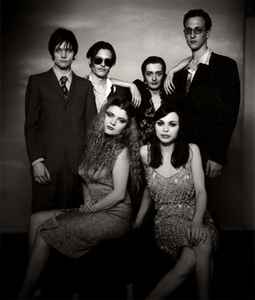 (summarized from Mute Liberation Technologies website):
First discovered in 1991 busking on Portobello Road by Barry Adamson. He invited the 20 year old Jocelyn West, Kelly McCusker and Katharine Blake to contribute vocals on Il Solitario from his Delusion soundtrack. Daniel Miller, in his turn, was equally impressed by these three graduates of the Purcell music school, and asked them to record for his label, Mute.
Their first single, Gush Forth My Tears was released in March 1991. They then decamped to Henry Wood Hall in Southwark with classical producer Tony Faulkner to record their debut album of madrigals Madra. It took them only two days and was released in May. The trio performed their songs to a hostile audience of Blur fans at London's Astoria in April 1991. Refusing to flinch despite catcalls of "Get yer tits out" won them the respect of audience and press alike.
Following the vocals-only simplicity of Madra, MSG expanded their sound to incorporate violins, and then took on Ben Golomstock and Trevor Sharpe to bring organ, bass and drums into the equation. In 1992, Jocelyn West was replaced by Donna McKevitt, and in May that year, the mini-album Iris was released. The band went on to play more startling live shows with the likes of Curve, Nick Cave and The Balanescu Quartet.
By the time Play was released in January 1993 they had all but renounced their original sound. After touring with Levitation and Spiritualized, the band began working, in collaboration with Simon Fisher Turner and various other artists, on the soundtrack for Derek Jarman's Blue.
More line-up changes were to come at the turn of '93/'94, when Kelly left to be replaced by singer, keyboards player and violinist Hepzibah Sessa.
Following their work on Blue, MSG began making a name for themselves at various multi-media events; playing as their alter egos Waltzing Maggots at London's fetish emporium The Torture Garden, and hosting The Lunatic Fringe nights at Holborn's Leisure Lounge. The next LP reflected more of their interest in fetishism. Fairytales Of Slavery, produced by Einstürzende Neubauten's Alexander Hacke, was preceded by the single Peepshow, launched with a performance by the band in the window of Tower Records, Piccadilly Circus. The Lunatic Fringe was expanded to nights at the Waikiki Lounge, performing with artists such as Minty, transvestite rocker Sexton Ming and body artist Alex Binnie. This genre-bending fusion of artistry was welcomed by all kinds of voyeurs, trendsetters and genuine bizzarros. After the 94' tour, Hepsibah left the band to join Alan Wilder (ex-Depeche Mode) in his project Recoil.
The band took a hiatus after the release of “Fairytales of Slavery” during which founder member Katharine Blake formed the wildly successful all girl band Mediæval Bæbes who debuted at number 1 in the classical charts with their “Salva Nos” album.
Miranda Sex Garden then reformed with some new members and released their last album, the aptly named “Carnival of Souls”, featuring the bands swan song “Without Trace”. The band also contributed a song to a Radiohead tribute entitled “Exit music for a film”.
After this the Mediæval Bæbes took over as Katharine’s main concern, and MSG fell into a slumber.
In 2006 Ben Golomstock released a solo album under the name Stories From The Moon which featured members of Miranda Sex Garden, Mediaeval Baebes, Queen Adreena, Colt, etc. which highly reprized the traditional MSG sound.
In 2007 Katharine Blake released her first solo album, “Midnight Flower”, and In March 2009 Jocelyn West released her solo album, “Salt Bird”.
Sites:
mutelibtech.com, mirandasexgarden.com, Wikipedia
Members:
Ben Golomstock, Donna McKevitt, Hepzibah Sessa, Jocelyn West, Katharine Blake, Kelly McCusker, Kim Fahy, Trevor Sharpe
Variations:
Viewing All | Miranda Sex Garden
Miranda's Sex Garden