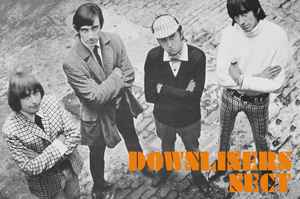 Profile:
Downliners Sect were a British 1960s group with an R&B style similar to The Yardbirds or Rolling Stones, formed by rhythm guitarist/vocalist Mick O'Donnell with drummer Johnny Sutton when their group the Downliners disbanded after a disastrous French tour.

Arthur Evans, originally a drummer, joined the band and became bass guitarist/vocalist, whilst an earlier lead guitarist was replaced by Terry Gibson (AKA Terry Clemson) from an Orpington band called The Hoods. O'Donnell and Evans decided to change their performing names to Don Craine and Keith Grant (2) respectively, although they retained their real names in writing/arranging credits.

The band's first studio recordings in 1963 were "Cadillac" & "Roll Over Beethoven", but were not released until much later. The first Downliners Sect release was a self-financed EP of 400 copies, titled "Nite In Gt. Newport Street" - recorded live in the street's club Studio 51, run by Vi Highland & Pat Mayhew, later to become the Ken Colyer Club. It was here that the band met and took on Ray Sone as harmonica player.

They signed a deal with EMI/Columbia in 1964, recording "Baby What's Wrong" and the album "The Sect". Their EP had gained attention on Swedish pirate radio and a single, "Little Egypt", reached No 2 in the Swedish charts in April, 1965 - at the same time Sone was replaced by Pip Harvey. Harvey left before the band recorded the album "The Rock Sect's In" and a single "The Cost Of Living", after which Gibson & Sutton quit the band. One notable session musician & arranger in four of their albums was John Paul Jones.