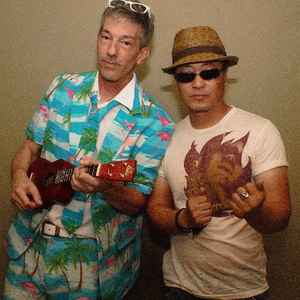 Real Name:
Spellbound
Profile:
Spellbound was founded by award-winning songwriters and producers Paul ‘Pablo’ Thomas (guitars, keyboards) and Bobby Moon (vocals, percussion) from Los Angeles, California. The duo have been performing and producing an expanding catalog of critically-acclaimed albums over the past two decades.
Spellbound's original blend of soulful compositions & Spanglish lyrics create a danceable fusion of Latin rhythms, funk, rock, and beyond. Spellbound is supported by a rotating cast of guest artists & musicians, including members of Ozomatli and ? & the Mysterians, Candi Sosa, Art "Mr.Flute" Webb, Roger Manning and many more.
Moon & Thomas became friends as teens, soon forming a band, Life After Death. The quartet released a 4-song vinyl E.P. which has endured to become an underground Post-Punk classic. Life After Death made an impact on the musical scene in Los Angeles with their spiky hair, 'guyliner,' and their experimental use of samplers and drum machines during live performances. Life After Death went through a whirlwind two years with concerts, producing video, recording, and auditioning for record labels, before the members chose to pursue their own musical careers. Thankfully, the Thomas and Moon songwriting team remained, using the momentum they had built with Life After Death, to launch their new project, Spellbound. It was the 1990’s and Thomas and Moon were ready for a new evolution in Funk, Dance and Latin music.
Beginning with their self-titled album in 1996 - includes the crowd favorite “Good Company”, Spellbound has released a succession of internationally-distributed albums on their own Selfish Recordings label. 1999’s Funqueros - dubbed “a jewel of magnanimous proportions”, Campus Circle (Vol.9 #14) - which created a buzz resulting in a cascade of live performances around Southern California, most notably an opening slot at the coveted Summer Concert Series at The Hollywood Bowl in July 2002. By 2007, Spellbound with the release of their album, Poolside Fiesta, debuted their first video, "Hot Sauce." In 2008, Thomas and Moon achieved another milestone by acquiring their own recording facility, Tripsville Studio in Los Angeles. Tripsville has been home to not only Spellbound creations, but also solo and side projects, including the Bobby Moon (2009), Candi Sosa’s Faded Blue Jeans (2012), Pablo’s Escape Velocity (2013) and Thomas & Moon’s MP3 single "Poison in our Skies" (2014).
2018 marks the release of Spellbound’s newest album, The Main Hustle, featuring the line-up of Thomas and Moon along with Candi Sosa (vocals & per.), Art Webb (flute), Margaret Young (vocals), Scott Martin (saxes) and addition of newest member Blewfoot (drums). 10 all original songs written & produced by Thomas & Moon. This is Spellbound's funkiest album to date. In today's world of side hustles this is Spellbound's Main Hustle!
Sites:
spellboundband.com, Facebook, instagram.com, Twitter
Members:
Bobby Moon (3), Paul 'Pablo Thomas