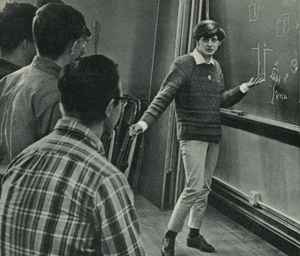 Real Name:
Joël Sternheimer
Profile:
Evariste, born 31 January 1943 in Montluel, Ain, is a French, independent (and heavily criticized) scientist and former singer, now living in Paris. His father was killed at Auschwitz (Poland) during WWII, and he was home-schooled by his mother and relatives. During his preparational studies in Lyon 1960-63, he wrote his first lyrics aged 16. In Lyon, he obtained his doctorate in theoretical physics (3rd cycle) at the University of Lyon, which led to further studies and a position as assistant professor in physics at Princeton, USA 1966-67.

Back in France, he started writing songs under the pseudonym Evariste (a reference to the French mathematician Évariste Galois, 1811-32) and he got a recording deal with Disc'Az where he released a string of singles and EPs, among which Connais-tu l'animal qui inventa le calcul intégral? became a novelty hit in 1966, with music written by Michel Colombier (later of Hollywood fame). In 1968-1970, he released 3 self-produced (some of the very first, French self-produced) singles and an EP, all with covers by the great Tunisian-French cartoonist Georges Wolinski, who was murdered outside the offices of Charlie Hebdo in 2015. Evariste's last record seems to have been released in 1975.