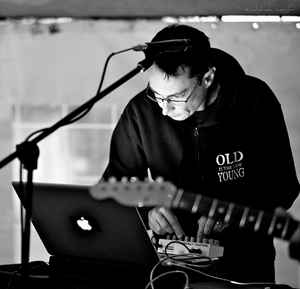 Real Name:
Matteo Uggeri
Profile:
Matteo Uggeri is an Italian visual designer and composer from Milan. He has been active in the field of industrial music since 1996, then with his much more melody-oriented band Sparkle in Grey. Most of the releases under his own names are in collaboration with other artists such as M.B./Maurizio Bianchi, Controlled Bleeding, Francesco Giannico, Tex La Homa, Giulio Aldinucci, Deison, Nuno Moita, Andrea Ferraris, Enrico Coniglio, Maurizio Abate and others. His latest (2017) solo moniker is Barnacles, a more 'tribal beats' project.

Hallmark of the Sparkle in Grey group are the illustrations with the distinctive image of the ’'Roundmen'’, whose pictures Uggeri draws with various techniques, also experimenting with disc graphics and rare videos between analog and digital, so far the two main poles and cornerstones of his artistic research. A good example is “Remote Control” (2011), a work on two VHS that mocks Italian TV habits showing an hour and a half zapping and whose soundtrack is provided by other artists involved in the project, including Zbigniew Karkowski, Jan Yun, Wooden Veil, Eraldo Bernocchi and If, Bwana. The work is published by Moriremo Tutti Records, Uggeri’s own label, a sort of counterpoint to the milder Grey Sparkle, a brand under which he often self-publishes his works.
Sites:
greysparkle.com, Facebook
Aliases:
Barnacles, Der Einzige, Hue, Normality / Edge
In Groups:
European Cemetery, Meerkat (2), Norm (6), Open To The Sea, Sparkle In A Voice, Sparkle In Grey, Spring Quintet, Starlight Assembly
Variations:
Viewing All | Matteo Uggeri
M. Uggeri, Matteo Uggeri | Hue, Uggeri