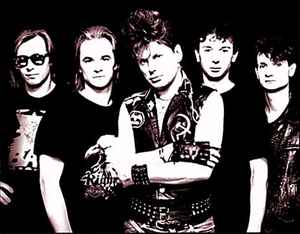 Profile:
Sektor Gaza (Russian: Сектор газа, Gaza Strip; also sounds like "gas sector" ("throttle quadrant") in Russian) was the name of a rock band formed by Юрий Клинских on December, 5, 1987 in the city of Voronezh, Russia, who still remains one of the most popular in Russia, although it was never acknowledged officially. The name of the group has nothing to deal with the Middle East conflict, it was named after an ecologically contaminated industrial zone of Voronezh, which the natives call "Sector of gas". As for their music, one may say they play a kind of Russian punk, using different musical trends, such as rock, rap and Russian folk.
The group released four videoclips: "Kolkhoz punk", "Lyric", "The fog" and "It's time to return home". Together with DJ Mole Юрий Клинских arranged some "SG" remixes in techno, but because of the economical crisis in Russia and, therefore, financial problems, release of the remix album is delayed. "SG" uses four letter words in their songs, but they very rarely do it at their concerts. "I am using four letter words not for the sake of it" - admitted Юрий Клинских - "our songs are for those who can understand us. If you're stupid, you remain the same after the concert".
In November 1998 "SG" had a successful concert tour in Russia. And all the "SG" fans were looking forward to the new album.
New album "Risen from a Hell" was released in October 2000. But the band's leader Юрий Клинских didn't seen that. On July 4th, 2000, Юрий Клинских began to feel a strong pain in his stomach and the left side of his chest. He chose not to cancel a meeting later that day to film a music video for the song "Noch Straha" hoping that the pain would simply fade away. Soon afterwards, his heart stopped. At the age of 35, he died in Voronezh (Russia). He is buried on a Levoberezhniy cemetery.
Sites:
web.archive.org, sektorgaza.net, Wikipedia
Members:
Александр Якушев, Алексей Ушаков, Андрей Дельцов, Вадим Глухов, Василий Черных, Владимир Лобанов, Игорь Жирнов, Игорь Кущев, Сергей Тупикин, Татьяна Фатеева, Юрий Клинских
Variations:
Viewing All | Сектор Газа
Cektor Gaza, Sector Gaza, Sektor Gaza, Гр."Сектор газа", Группа "Сектор Газа"