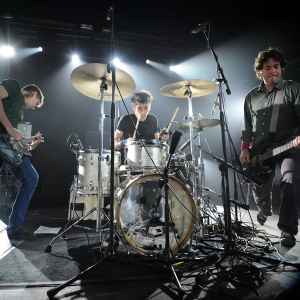 Profile:
Shellac are an indie rock band from Chicago, IL, USA. The group was formed in 1992 by vocalist/guitarist Steve Albini and drummer Todd Trainer. Former Naked Raygun bassist Camilo Gonzalez sat in on the band's first few rehearsals and recorded one song ("Rambler Song") with them before Bob Weston joined to permanently fill the bass position.

Shellac records and performs infrequently due to their geographic separation (both Albini and Weston live in Chicago while Trainer lives in Minnesota) and the fact that all the members have day jobs (both Albini and Weston are recording engineers while Trainer has managed a warehouse and tended bar). Trainer has also released solo albums under the name Brick Layer Cake and Weston works with Mission Of Burma.
Sites:
touchandgorecords.com, store.touchandgorecords.com, Wikipedia, Facebook, setlist.fm
Members:
Robert Weston, Steve Albini, Todd Trainer
Variations:
Viewing All | Shellac
Schellack, シェラック

July 11, 2018
Shellac has their very personnal esthetic, such as bands like Primus, Slint, Flaming Lips, Paris' Click, or Flotation Toys Warning. You know what I mean ? They are real artists with a high level of creativity so you hate their music or you love it. Be curious and try !
Reply Notify me Helpful

January 5, 2013
Shellac is the latest band of Steve Albini. Earlier ones, like Big Black and Rapeman (i wasn't much into Rapeman, but my honors to Big Black) were incredible too, in terms of recording and production, musically or sonically, very intriguing too. Rad. A must to be heard by any noise rock enthusiast and sonic freq lover.
Steve Albini produces and plays on the Shellac. If you know the man's back "history" and effort on the underground scene overall, you will know what i am talking about. Everyone who doesn't have heard of this band, or Albini, as musician and sound engineer. on whatever he gets involved, Shellac is very good place to start...
Reply Notify me 6 Helpful