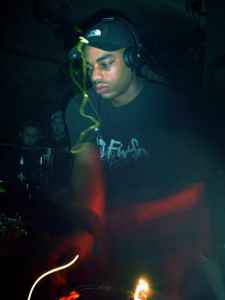 Real Name:
Aaron McDuffus
Profile:
The Universal Project sound is Bboy breaks it's got techno elements, dubwise bass and everything in between with a futuristic twist.

Initially formed in 2000 as a foursome, their tunes began to smash up dancefloors everywhere, including tracks such as "The Craft" and the huge soundsystem banger "Haunted dreams". Soon, big drum & bass labels were knocking on their door. Renegade Hardware and Virus came calling and UP's techno classic "Vessel" was released under the Virus imprint.

The Universal Project Recordings label idea came soon after with an aim to annihilate dancefloors and spread the sound, with an manifesto to bring through like-minded producers from across the globe. Some of UP's largest releases hit, in the shape of "Glock", "Warboyz", "Bleach" and "Outrun".

The original foursome went in individual directions, and Universal Project is today just one man, Ruxspin. Hailing from a musical background, he began DJ'ing in 1993 everything from early Hardcore through to Jungle as the sound progressed. He spent many years playing on some of London's most notorious Pirate Radio Stations, finding a following in the underground and is widely respected amongst the DJ'ing community.
Sites:
MySpace, Facebook
Aliases:
Aaron McDuffus, Ruxspin
Members:
Ajit Steyns, G. Taylor-Karrer, Lawrence Hughes, Scandal (5)