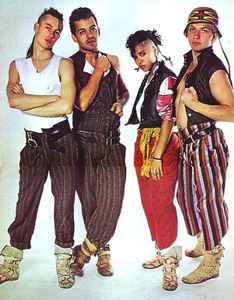 Profile:
Formed in 1980 by Malcolm McLaren after the demise of the Sex Pistols, Bow Wow Wow were originally members of Adam And The Ants. On McLaren's advice, .they recruited a 14-year-old singer named Myint Myint Aye (Burmese for "High High Cool"), who was later renamed Annabella Lwin.

Typified by Burundi-style drumming and Lwin's singing, which veered between screaming and ritual chants, After signing with RCA Bow Wow Wow saw some early success in the UK, and eventually scored a minor hit in the US with their cover of the classic 1965 single "I Want Candy" originally by US group The Strangeloves. Their first US LP was released in 1982 amid controversy over the cover which depicted the young singer nude with the rest of the group (clothed), The group split in 1984 with the young singer pursuing a solo career as "Annabella", while the rest of the group became "Chiefs Of Relief". Bow Wow Wow eventually reunited in some capacity during the mid 1990's.
Sites:
Wikipedia
Members:
Annabella Lwin, Dave Barbarossa, Leigh Gorman, Matt Fuller, Matthew Ashman
Variations:
Viewing All | Bow Wow Wow
BowWowWow, Bowwowwow, バウ・ワウ・ワウ

Bow Wow Wow is an underestimated group, the talent of each member of the group makes all their albums excellent.
My favorite album is "When The Going Gets Tough, The Tough Get Going"
All members are very skillful in each of her instruments and Annabell performs with her mellifluous voice fitting perfectly.

Bow wow wow is one of the best bands Britain.