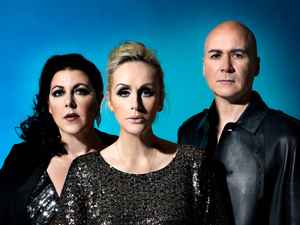 Profile:
Electronic band from Sheffield, England. Formed in 1977 by Martyn Ware and Ian Craig Marsh. Originally called 'The Future', but changed their name to 'The Human League' in 1978 with the addition of vocalist Phil Oakey and the release of the single "Being Boiled".

This original lineup lasted until 1980, after which Ware and Marsh left to form Heaven 17. Oakey kept the band name and added female vocalists, and it is this incarnation that gained widespread popularity.

Mainly known for a synthesizer based pop sound, in particular the song “Don’t You Want Me”.

May 28, 2002
Continuing from Mr. Tech above...Ian Craig Marsh and Martyn Ware after leaving Oakey and Wright formed B.E.F., or, The British Electric Foundation.
If you have the Japanese import of the Holiday '80 EP on 12" vinyl, it has a large picture label of the original Human League, Oakey, Wright, Marsh and Ware.
B.E.F. issued an album on cassette tape only called 'Music for Stowaways' for their first release, this was totally instrumental, and this is where the classic 'We Don't Need This (Fascist Groove Thang)' first appeared as an instrumental. Next came a vinyl version of this album but with a minor track change, 'A Baby Called Billy' (some dispute still rages as to whether this has any reference to Billy Mackenzie of the Associates who later recorded three tracks with Marsh and Ware under the B.E.F. moniker), featured on the vinyl version only. The vinyl record was sought after at the time as it was marketed for 'export only', but I remember seeing loads of these at the time. B.E.F. later produced two compilation albums, nine years apart I might add, with various guest vocalists appearing. The first early 80's album was more in tune with the 80's sound, but the early 90's album seemed to be hinting towards that Level 42 type Funk Fusion sound. All great stuff though. The first compilation album was also released as a 7" box set, which is a very nice collectors piece.
I have just burned a very nice CD-R with complete original artwork of the first 'Music for...' releases which include all the early tracks.
On a final note, March and Ware also produced some songs for solo members of the 80's dance troup, Hot Gossip. Most of these seem to be early Human League covers, such as, 'I Don't Depend on You' (originally recorded by The Men, but was the first Human League line-up). These productions along with many other's can easily be found on ebay and www.Netsounds.com
Reply Notify me 5 Helpful

March 25, 2002
Most people remember 'the League' from their successful post 1981 synth-pop, but credit must be given to the original line-up (before Ian Craig Marsh and Adrian Ware split to form 'Heaven 17'). Although not commercially as successful, the first two albums, 'Travelogue' and 'Reproduction' were considerably darker. Along with Gary Newman, they were among the very first (UK) artists to produce TOTALLY electronic music.
Reply Notify me 11 Helpful