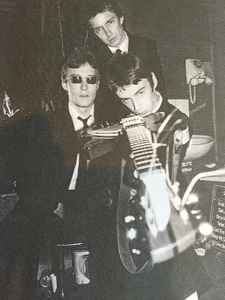 Profile:
Formed in 1972 at Sheerwater Secondary School in Woking, England, The Jam consisted of three Members - Paul Weller (Lead Guitar, Vocals,) Rick Buckler (Drums & Percussion) and Bruce Foxton (Bass Guitar, Backing Vocals). Foxton, joined in 1977, leaving local Rock band 'Zita'. As time went on and the style of the Jam’s music progressed into the 1980s, additional musicians were recruited for brass sections, percussion and backing vocals; in the case of the latter, a young female vocalist from Telford called Tracie Young (who subsequently had her own top 10 UK hit in 1983 as a solo artist with the pop song "The House That Jack Built") also appeared on the group's last three singles and was an original member of Weller’s next group; The Style Council.

By his own admission (in The Jam’s official 1983 Biography 'A Beat Concerto', written by Paolo Hewitt) Weller was influenced into forming The Jam after going to a concert of London Punk band The Clash. The name of the group came from Weller’s sister who suggested the title at breakfast one day. The first Album ‘In The City’ (1977) reflected the period of New Wave Punk that was happening in London at that time. Other songs on the album, which reflected Weller’s Punk influences, are the frantic 'Slow Down' and the equally fast paced 'Batman Theme'.

Possibly the key to the groups overwhelming success was not only Weller's outstanding ability as a songwriter and musician but also his ability to move with the times. Punk faded away in 1979 and whilst the group’s second album 'This Is The Modern World' contained elements of the Post-Punk songwriting that appeared on the previous Album, a new audience began to associate themselves with the group; the early 80s Mod Revival or 'Jam Boys' as they became known. Famously, the first draft of the 'All Mod Cons' album was scrapped in a trying period for the band with Weller temporarily lacking motivation. However the revised version of the album was well received and three more successful albums followed: 'Setting Sons', 'Sound Affects' and 'The Gift'. The group became synonymous with the 70s/80s mod scene (partly against their will), influencing other bands in the process. Weller himself came from a musical background which consisted of Northern Soul, Motown and 60s Pop bands such as The Who and The Kinks and this was reflected within the music on all of those albums. The release of 'The Gift' coincided with the band’s most successful period and contained two number one singles.

By the turn of the 1980s, The Jam was the biggest UK Singles band. All in all they scored five number one singles, the first one being 'Going Underground' which alongside 'Town Called Malice' is arguably their most famous release. When the band split it was one of a small number of their singles re-released early in 1983 that saw chart entries in the UK Top 40 with three re-releases all at once. These were 'Beat Surrender', 'Going Underground' and 'All Around The World'. Along with The Beatles, The Jam remain the only other band in the UK to have simultaneously played both sides of a 'AA' release live on the BBC music show 'Top Of The Pops', this occurring with the 1981 No. 1 single 'Town Called Malice/Precious'.

In 1982 and to the dismay of millions of their fans, Paul Weller made the shock announcement that the band was to split up. The next and final single released in December 1982 'Beat Surrender' went straight in at No. 1 and remains a lasting legacy from one of the most successful British bands ever.
Sites:
fromthejamofficial.com, Wikipedia, Facebook
Members:
Bruce Foxton, Dave Waller, Paul Weller, Rick Buckler, Steve Brookes
Variations:
Viewing All | The Jam
JAM, Jam, ザ・ジャム, ジャム

May 11, 2022
Please put the 1st two albums in correct chronological order. 'In the City' came out first.

I agree with the negative comments about this puzzling write-up which I'd say is about as accurate as Michael J Fox in an archery contest "The mod revival in the early 80's"? I went to see them in '78 on the 'all MOD cons' tour wearing a fishtail Parka, Ben Sherman, Sta-Pressed, and obviously Jam shoes. There was no "mod revival" it was just how Jam fans dressed. Sure we called ourselves mods but only because the Jam did. The most ridiculous question you could ask a "New MOD" back then would have been "what's your favourite band?" There was no other band. Remember there were only two other 'MOD revival" acts and they were 'secret affair' and 'the merton parkas' and they managed about 3 hits between them. I could go on for pages about how misleading the band synopsis is here but I suppose there are enough biographies available to get closer to the truth. Unless you were a wide-eyed teen in the late 70's you'll probably never quite understand the impact this band had. Clearly the write up was done by a millennial with zero knowledge or love for The Jam who were (and still are) the finest 3 piece ever to grace a stage anywhere in the world. Lads I salute you and thank you for the best years of my life. As for the write up I'd suggest you read the comments to get some real info. There are some much more knowledgable balanced reviews in there from people who give a shit whether what they say is accurate. Foxton joined when? LOL

September 11, 2020
For a moment, between 1979-1982, The Jam ruled the UK music scene. For those that were there, we will never forget. It was more than just the music, it was the look, the attitude and the lyrics. I still have the shoes.
Reply Notify me 2 Helpful

Nobody seems to have spotted the date error on the JAM description header ,it reads "Formed in Woking, England in 1976,"i think it's fair to say they were actually formed and indeed won a talent contest way before that ,it's well documented to be 1973 .....perhaps possibly 1972.
The talent contest was in April of 73 at Woking ,UK.
If 76 was a reference to recorded material ...ie records ,that again is incorrect it's 77. .
So how is 76 is attributed to the "formation" NEEDS CHANGING .
Foxton joined May 1973 ,not 77 ....zita ?? er no ,it's a mess is this description ,suprised the experts didn't notice anything.

August 24, 2020
Seriously,:'citizen journalism'.
"Formed The Jam after seeing The Clash"??
"Bruce Foxton joined in 1977"??
Welcome to 'The Internet' where drivel passes as fact.
Reply  See 1 reply Notify me 2 Helpful

August 4, 2020
I used to see loads of these advertised in the 90s. Often the same tracks were pressed on different colours too! Obviously very cheap to produce and put in a unique 'homemade' Xerox PS.
I would imagine great fun but frustrating to collect!
Reply Notify me Helpful

May 21, 2020
I've managed to track down over 100 of these and as you said some obscure album tracks on them
Reply Notify me Helpful

March 5, 2020
Does anyone know how many singles/tracks were released as Russian Flexi Discs(BYA KOH Label)?I have 14 of them but unsure if there were anymore
Reply  See 3 replies Notify me 1 Helpful

This just sold on eBay. Just missed out on it
Reply Notify me Helpful

March 9, 2018
Anyone know anything about an LP, The Jam "The Boston Tea Party - Live At The Paradise Ballroom, Boston '79" It states "For Radio Station Use Only On The Following
Boston Colleges
Rochford Campus
Chestnut Hill Campus
Wheelock College
Kings Boston Pine Manor College Campus
Campus Tan