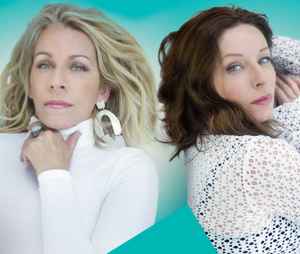 Profile:
Bananarama was formed in London in 1981 by childhood friends Keren Woodward and Sarah Dallin and their friend Siobhan Fahey.
After a debut single produced by former Sex Pistols member Paul Cook that shook the UK pop market to its very foundation (a #92 smash), they teamed up with ex Specials member Terry Hall's new band, Fun Boy Three. "It Ain't What You Do", released in February 1982 entered the UK charts at number 4.
International success came with their self-titled second album produced by Tony Swain and Steve Jolley and the monster hit single "Cruel Summer".

In 1986, the girls teamed up with UK dance music super-producers Stock, Aitken & Waterman and achieved number one all around the world, including the US, with their cover of the Shocking Blue's classic "Venus". In 1988, the trio were named by the Guinness Book of Records as the most successful female group in pop history, beating Supremes. They celebrated by releasing a SAW-produced version of the Supremes' "Nathan Jones". After the single's release however, Fahey decided to leave the trio to form Shakespear's Sister. She was replaced by Jacquie O'Sullivan who had appeared with the original Bananarama line-up in the Eurythmics video for "Who's That Girl", back in June 1983. O'Sullivan left in late 1991.
Sara and Keren have since continued as a duo.

Following a one-off reunion recording of ABBA's "Waterloo" with Siobhan in April 1998 for Channel 4's "Eurotrash" TV series hosted by Jean Paul Gaultier, the duo returned in 2001 with their 8th studio album, Exotica. In February 2002, Bananarama celebrated their 20th anniversary, joined on-stage by Siobhan. Their 2005 club hit "Move In My Direction" is their first UK single release since 1993.

All through their career the girls have, together or individually, married Eurythmics' male half (David A. Stewart), dated Wham!'s straight half (Andrew Ridgeley), reached the UK top 3 with French and Saunders, appeared on both the original Band Aid and Band Aid II, met Robert De Niro, shot a Japanese commercial with Peter Fonda and appeared in the movie Rules Of Attraction.

November 12, 2021
All of the albums they have produced always seem to have fit into the era the came out in. Example Ultra Violet 1995 is completely different from the first few albums, but it's all aged like fine wine.
Reply Notify me Helpful

January 22, 2020
Since I was 10 or so,they've been my band-catchy,fun,relatable,a great ear for producers,and great writers of lyrics...always delivering,but getting criticised in the 80's..don't understand that-what i know is they were better than any of the PWL "made" acts,because they have the say in where the songs go...as a trio,the second trio,or as a duo---i like it all. But as a duo live or in studio,there is something to be said for how they sound...in tune and comfortable with the other,vocally and the direction they take.They are the best girl group the world will know,and that relies on classic songs after song.And maybe,one of the most distinctive groups ever.They really say it their way,and have fun doing it.I think their music doubles as an antidepressant,if you let it.When you're young,you just like it...so why dissect it too much.The best music in history is made to enjoy...so enjoy it all.Here's to ten more years!!
Reply  See 1 reply Notify me 1 Helpful

May 14, 2017
they are AMAZING!they've been the soundtrack of my life...my first 12" was really sayin' something/aie a mwana us edition...and from then on i collect everything they have done.
BEST FEMALE GROUP EVER!
Reply Notify me 4 Helpful

April 25, 2017
And just like that they are 3 again. Welcome back Siobhan.
Reply Notify me 5 Helpful

Personally i would and never really do blame bananarama for making a few weak albums in the last few years,much of the blame is on the producer(s),the song writing and that person who has no-idea in choosing proper singles,bananarama really need to find a producer who has talent and a vision,trying to sound like everyone else is not a benefit but will be their undoing,i'm starting to fear that bananarama are become much too Over-produced to the point of being boring and desperate,this latest production is basically kissing up and bowing to the Late night club kids,bananarama as i see it really need to get back with Siobhan and some very cutting edge producers who believe in the ladies and what their doing or hope to do before no one remotely cares.... Swedish production/producers might be an idea or better yet pete hammond