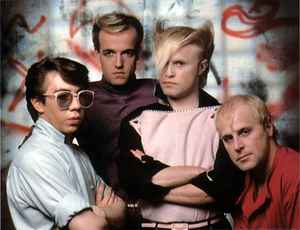 A Flock Of Seagulls

A Flock Of Seagulls was started by Mike Score and his brother Ali in 1979, in Liverpool.

Mike, who was previously a hairdresser, played keyboards, guitar, and vocals, Ali played drums and their friend Frank Maudsley played bass.
The band took their name from a line in the song "Toiler On The Sea," by The Stranglers, which appears on their album "Black And White."
The band added guitarist Willie Woo, and Mark Edmondson joined briefly when Ali and Mike had a falling out; however, Ali re-joined when Mark took ill. They then began writing songs.

Soon after, Willie left, allowing Paul Reynolds to join. They then started playing clubs and eventually got a recording contract.

Eventually, under the management of Tommy Crossan and Mick Rossi (Checkmount Ltd.), they began to release singles through Jive Records.
The group released an EP and a couple of singles, "(It's Not Me) Talking," and "Telecommunication," on Bill Nelson's "Cocteau," label; both tracks produced by Nelson.

In 1982 the group's third single "I Ran (So Far Away)," became a worldwide hit, most notably reaching number 1 in Australia and the top 10 in the US and New Zealand. The parent album "A Flock Of Seagulls," and another single "Space Age Love Song," were also successful.

In late 1982 the band found major success in their home country with "Wishing (If I Had a Photograph of You)," (first single from their next album) which reached the top 10.

As it turned out, 1982 would prove to be the peak year of their commercial and critical success.

1983 saw the release of three singles to back their second album "Listen."
Each was only a minor success in the UK and abroad. The album bore a heavily processed electronic sound that was a break from the Duran Duran guitar and bass driven sound of their début.

The group produced a third album in 1984 that leant closer to a guitar sound.

"The More You Live, The More You Love," was "The Story of a Young Heart's," lead single. It was moderately successful, despite having production that recalled their breakout hit "I Ran (So Far Away)," The album's other two singles - "Never Again (The Dancer)," and "Remember David," - didn't make any headway.

Faced with sliding sales and a loss of direction following the third album the group relocated to Philadelphia, Pennsylvania minus Paul Reynolds.
Eventually in 1985 the group released a new album; "Dream Come True." Despite having a new sound based around the Fairlight Synthesizer the album was critically panned and a commercial failure.

The remaining members fell out and A Flock Of Seagulls in its original incarnation disbanded. In promotion of "Dream Come True," These two videos were the last time the three remaining members were together in a recording or performance capacity until 2004.

In November 2003, the original line-up (Mike and Ali Score, Paul Reynolds and Frank Maudsley) reunited for a one-off performance on the "VH1 Series, Bands Reunited."

March 17, 2022
Actually saw the band live last night. Absolutely brilliant. Mike's new line-up were quite spectacular, wish I could find out their names. If you get a chance to see them, do not hesitate!
Reply Notify me 1 Helpful

December 27, 2021
The early output of A Flock of Seagulls truly represents a high point of 80s pop rock and New Wave. There is an intoxicating, synthetic ecstasy and soaring optimism that radiates from those tracks and elevates them into a timeless territory. As impactful and exhilarating as ever today!
Reply Notify me 1 Helpful