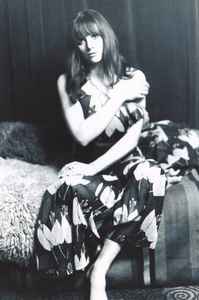 Vivienne was a founder member of Principal Edwards Magic Theatre, a band formed at Exeter University. One of the first bands to use theatre as part of their act, they were signed by Radio One DJ John Peel to his own label, Dandelion Records. Vivienne went on to play with Affinity (4) and then sung with various bands around London. She also sang on many records, with artists such as Gerry Rafferty (on the Baker Street album, City To City), Patrick Moraz and various members of Genesis.
In later life she worked with legendary fashion designer John Galliano and eventually became senior lecturer at the London College of Fashion whilst still being involved in the music scene.
In Groups:
Affinity (4), Principal Edwards Magic Theatre
Variations:
Viewing All | Vivienne McAuliffe
McAuliffe, V. McAuliffe, Viv McAuliffe, Viv McCauliffe, Viv Mccauliffe, Vivi McAuliffe, Vivian McAuliff, Vivian McAuliffe, Vivienne McAuliff