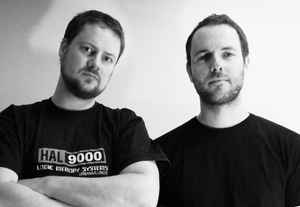 Spearheads of the UK acid house scene, Posthuman's output has evolved over the years, encompassing many genres & styles from their early electronica releases, through techno and electro to acid house.

Their debut release in 2000 was a series of handmade CDs simply called "Posthuman" (though better known by the colour of the card inserts - grey, black, blue and brown). The duo then went on to host a number of parties in an abandoned underground train station in London between 2001 and 2004, and founded their own label Seed Records (2) with which they released 3 albums and several other releases of their own and other artists' material. They also were the first act on Manchester based imprint Skam's SMAK sublabel.

In 2007, Doherty founded acid-focused clubnight "I Love Acid" along with Luke Vibert who's track it was named after, where Posthuman are resident DJs. It won "Best Club Event" in DJ Magazine's Best of British awards 2019. In 2014 the clubnight launched a vinyl-only label also named I Love Acid. He also performed as one half of Altern 8's live shows between 2015 and 2020.
Sites:
posthumanmusic.com, Facebook, SoundCloud, Twitter, YouTube, instagram.com, Bandcamp, discogs.com
Aliases:
On / Off, Snapmouth, The Deleter, The House Husbands, Walter Becomes Wendy
Members:
Joshu Doherty, Richard Bevan

June 8, 2019
Posthuman are some of my favorite artists in music right now. Love their work. Bravo. Incredible frequency of releases as well. So so good.
Reply Notify me Helpful