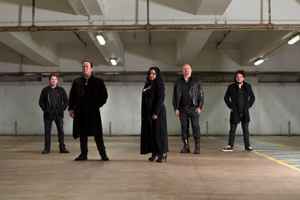 Profile:
The Danse Society are a post-punk gothic rock group from Barnsley, England, first formed in 1980. Their first releases on their own Society Records label, especially "Seduction", did well in the UK independent charts, and they were signed by Arista, hoping for greater commercial success. The original line-up included Paul Gilmartin (drums), Paul Nash (guitar), Steve Rawlings (voice), Lyndon Scarfe (keyboards), and Tim Wright (bass). After their 1983 album Heaven Is Waiting, Scarfe left and was replaced by David Whitaker (formerly with Music For Pleasure). The band released two more singles on Arista - "Say It Again" (produced by Stock, Aitken & Waterman) and "Hold On" (produced by Steve Thompson) - and plans were announced for an album of older tracks re-recorded in a more danceable, radio-friendly fashion, which never came to fruition. Instead, the band left Arista and demoed new songs, which were released in 1986 as their final album, Looking Through, once again on their own label. Steve Rawlings started Society (2), while the other band members continued for some time as Johnny in the Clouds, which never released any recordings.

At the end of 2009, Paul Gilmartin, Paul Nash, and David Whitaker met up for the first time in 24 years and decided to reform the band; initially, Steve Rawlings also agreed to rejoin the band. Over the next nine months, instrumental tracks were recorded, and in October 2010, Rawlings briefly met with the band in the UK, but returned to America after recording just one vocal track. Plans changed when, after that initial meeting, the band lost contact with Rawlings. In January 2011, vocalist Maethelyiah (of Blooding Mask) and recorded vocals for all thirteen tracks, and the official news of her joining the band was revealed the following May with the release of the reformation album Change of Skin. Bassist Martin Roberts joined the band before the release of Scarey Tales in February 2013. A year later, the band issued a statement that Gilmartin and Roberts had unexpectedly resigned from the band, resulting in the cancellation of a series of tour dates. The remaining members carried on without them, recruiting Iain Hunter (drums) and Jack Cooper (bass). Their sixth studio album, VI, was released in September 2015. Hunter was replaced by Josh Rylance, and the EP FUTUR1ST was released in 2018. Rylance was then replaced by Tom Davenport. The seventh studio album Sailing Mirrors was released in Sept 2020, and a retrospective A-Z anthology 40 years of Danse was released in November 2020 along with some early live concerts. The band are continuing to celebrate 40 years with further releases and a UK tour in 2021.
Sites:
web.archive.org, Bandcamp, thedansesociety.co.uk, Facebook, Wikipedia, MySpace
Members:
David Whitaker (3), Iain Hunter, Jack Cooper (11), Lyndon Scarfe, Maethelyiah, Martin Roberts (4), Paul Gilmartin, Paul Hampshire, Paul Nash, Sam Bollands, Steve Rawlings, Tim Wright (3)
Variations:
Viewing All | The Danse Society
Dance Society, Danse Society, T.D.S, T.D.S., The Danse Søciety