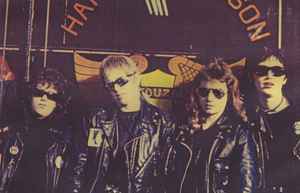 From the liner notes of 'Girls In Leather 1978 Demo': "VS was the very first all girl punk band in California... formed in early 1978, VS was the brainchild of bassist Olga DeVolga, fresh from The Offs; the other original members were Anny Unger, guitar (later to go on to The Gun Club) & Jane Weems (Insane Jane), drums (from The Maggots), as well as a few nameless guitarists; in thier brief early history, VS included Carola Anderson (Rosenthal), first on sax, then later on some vocal duties. VS were in the oribit on the very early punk scene of San Francisco... they played the very first "Off Broadway" show with the Avengers and The Dils, and were the very first band to ever step onstage to play the historic 1839 Geary Temple Beautiful venue...
After recording an early demo, they disintegrated, breaking off into other bands. Later incarnation of VS were to include a constant succession of other members, including men, but the first original line-up proved to be the most visually true & powerful to the original concept of Olga's".
Members:
Alex MacNicols, Anny Unger, Carola B. Anderson, Heidi Familiar, Indian Wells, Jane Weems, Olga De Volga
Variations:
Viewing All | VS. (2)
V.S., VS, Vs