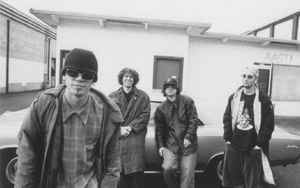 Profile:
Regan Hagar was in a band called Malfunkshun with Andrew Wood, and Malfunkshun shared a rehearsal space with Green River which Stone Gossard was a member of. Andrew Wood and Stone Gossard played together in Mother Love Bone after that and Regan, Shawn and Mike formed the band Satchel. They all remained friends during this time as Regan, Stone, and Jeff Ament would often have jam sessions and eventually Regan, Shawn, Mike, and Stone decided to form another band which they wanted to call `Shame` but that name was already taken by a man named Brad Wilson... so they decided on the next best thing, they called this band Brad. That is the story on how this band was formed.
Members:
Jeremy Toback, Mike Berg, Regan Hagar, Shawn Smith (2), Stone Gossard
Variations:
Viewing All | Brad
The Brad Corporation