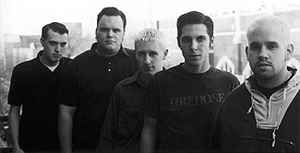 Profile:
Former Mouthpiece guitarist, Matt Wieder, moved to Louisville, KY to join up with former Endpoint personel to play in Guilt as well as The Enkindels. Not long after, the idea to put together a straight edge band with Enkindels/By The Grace Of God drummer, Thommy Browne, took hold and so starts the story of Automatic. Before recruiting more members for the band, they recorded their first seven inch with just Thommy on drums and Matt playing everything else.

When Automatic became a full functioning outfit, they found their guitarist in local hardcore scenester Ryan Patterson. Ben Teague later signed on to play bass for the first couple of shows and never left. The second guitar spot has been a revolving door but the core of the band has remained the same.

The band's sound is melodic and catchy, highly reminiscent of Dag Nasty- something Automatic isn't ashamed about at all. While most hardcore bands site the New York sound as a primary influence, Automatic take their sound and ideology from Washington D.C. greats like Swiz, Ignition, Bad Brains, Gray Matter and yes, Dag Nasty.

Ryan sums up the bands outlook on straight edge and being part of a "revival" movement. "We wanted to start a band that were guys that were a little bit older but were still straight edge and still into hardcore," Ryan points out that, "we are going to begin a hardcore band and end a hardcore band. Every one of our songs has rock aspects to it so there's no need for us to put out our 'Staring Into The Sun' or 'Aftertaste'.

If Automatic follows the footsteps of their DC predecessors, Their days maybe numbered. So don't miss your chance to catch what will surely be one of the late 90's most important hardcore bands.