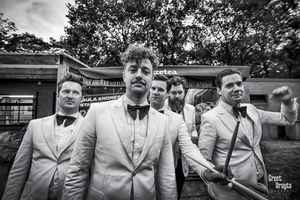 All band members were born in the years 1977–1978 and the group is led by the singer Howlin' Pelle Almqvist. After the year 2000, the group has achieved great success in Sweden and internationally. The Hives have distinguished themselves by dressing uniformly; not only on stage, but also at press conferences and other interviews, when all band members appear uniformly dressed where the stage costumes in changing designs have always been black and white.
Sites:
open.spotify.com, TheHives.com, Twitter, Twitter, Facebook, instagram.com, MySpace, Wikipedia, Wikipedia
Members:
Christian Grahn, Johan Gustafsson, Mattias Bernvall, Mikael Karlsson Åström, Niklas Almqvist, Per Almqvist
Variations:
Viewing All | The Hives
Hives, The Hives!!