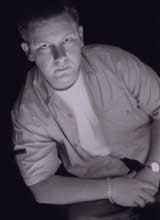 Hasirci, who's moniker stands for Aydin The Funki Chile, has been spinning vinyl for around fourteen years and owns his own sound production company, Onephatdeeva Productions. His most famous release to date is 'In and Out of My Life' - basically Fatboy Slim's 'Right Here, Right Now' with a vocal. It reached number 11 in the UK pop charts back in 1999, and earned Hasirci an apperance on Top Of The Pops. His follow-up, 'Bad Habit', made it into the Top 20.