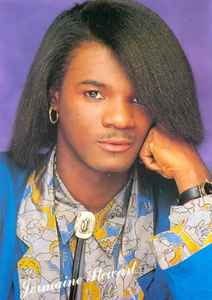 Real Name:
William Jermaine Stewart
Profile:
Born September 7, 1957, Columbus, Ohio, USA. Was a Soul Train dancer and briefly involved with Shalamar before signing with the Ten Records Ltd. (10 Records) division of Virgin in Britain and Arista in the US.
First chart success on both sides of the Atlantic was "The Word Is Out" in 1982.

His biggest hit was the 1986 safe-sex anthem "We Don't Have To Take Our Clothes Off". He continued recording until 1992 when what was to be his final album Jermaine Stewart - Set Me Free had its release canceled by Reprise Records though the 12" single of the title song was issued. He was recording songs for another album several years before his death, but that album remains unfinished.

Stewart, who had been living in Britain for most of his career, moved back to his native Chicago where he spent the remainder of his life battling AIDS.