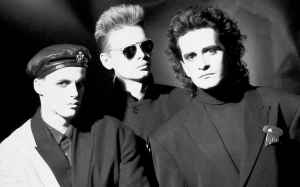 Profile:
Hubert Kah is a German synthpop band, led by Hubert Kemmler.
Started as a trio, consisting of Hubert Kemmler (vocals, keyboards), Markus Löhr (guitars, keyboards) and Klaus Hirschburger (bass) at the time of the New German Wave 1982 commercial success with the singles "Rosemarie", "Sternenhimmel" and "Einmal nur mit Erika... (dieser Welt entfliehn)", and with the albums "Meine Höhepunkte" and "Ich komme". During this time, Kemmler caused quite a stir by his TV appearances, wearing a nightdress or straitjacket.

As of 1984, the band began working with producer Michael Cretu. After a german album "Goldene Zeiten" (1984), the band recorded the english language albums "Tensongs" (1986) and "Sound of My Heart" (1989), which were partly successful internationally.

Hubert Kemmler fell ill in the later 1980s with depression and withdrew from music completely. After his recovery he appeared with a new version of the band in 1996 with the self-titled Hubert Kah and the singles "C'est La Vie" and "Sailing". The production with classic elements was not commercially as successful as hoped for by Kemmler. In 1998, a new single "Love Chain" and a Best Of CD were released. Kemmler then became ill again and had to undergo medical treatment.