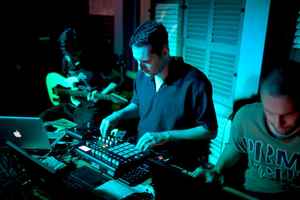 Profile:
Warren owns and manages Invisible Agent Records. With a background in radio, festivals, and clubs, Warren Daly began to create and perform his own music and live visuals as the curtain closed on the last millennium. His experience in the Irish music scene led him to co-found record label Invisible Agent in 2000, releasing its first 12″ vinyl in 2004 before making the move to an internationally-focused label which he now runs from South East Asia.

The disparate sounds of Ireland, South Africa and Cambodia serve as living inspiration for Daly, and while Invisible Agent continues to showcase a cavalcade of emerging talent, his eclectic approach to electronica has propelled him into the studio and out onto the stage with a series of remixes and releases under this own name.
Sites:
invisibleagent.com, Bandcamp, musicbrainz.org, allmusic.com, SoundCloud
In Groups:
Wash (13)
Variations:
Viewing All | Warren Daly (2)
W. Daly