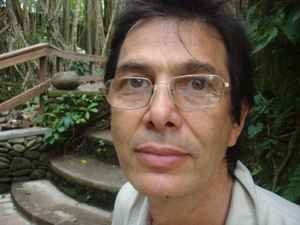 Profile:
Kraig Grady is a US-Australian composer/sound artist. He has composed and performed with an ensemble of microtonal instruments of his own design and also worked as a shadow puppeteer, tuning theorist, filmmaker, world music radio DJ and concert promoter. His works feature his own ensembles of acoustic instruments, including metallophones, marimbas, hammered dulcimers and reed organs tuned to microtonal just intonation scales. His compositions include accompaniments for silent films and shadow plays. An important influence in the development of Grady's music was Harry Partch, like Grady, a musician from the Southwest, and a composer of theatrical works in Just Intonation for self-built instruments.

Born in Montebello, California in 1952, Grady began composing while still in his teens. After studies with Nicolas Slonimsky, Dean Drummond, Dorrance Stalvey and Byong-Kon Kim , he produced his earliest compositions. Since meeting tuning theorist Erv Wilson in 1975, he has composed and performed in alternative tunings based on Wilson’s theories, first in 31-tone equal temperament, and eventually in the just intonation resources of Wilson's combination-product sets and meta-slendro.
Sites:
anaphoria.com, anaphoriasouth.blogspot.com
Aliases:
Anaphoria
In Groups:
Fat & Fucked Up
Variations:
Viewing All | Kraig Grady
Grady