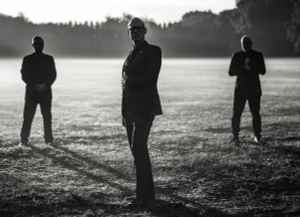 Friends since the mid-1980s, the members of Covenant released Dreams Of A Cryotank, their first album, in 1994. Line-up at theat time: vocalist and songwriter Eskil Simonsson, keyboardist and lyricist Joakim Montelius, and keyboardist Clas Nachmanson.

In 1998, after releasing two more albums and a handful of singles/EPs and the demise of their North American label 21st Circuitry, they started a relationship with distributor Metropolis with the release of the Euro EP.

December 8, 2018
Love this band and even have a CD from the live recording in the Netherlands Landgraaf OEFENBUNKER

November 10, 2009
Covenant is pretty much the only 90s EBM band still going strong today, and more importantly, still improving. Whereas most industrial acts fell prey to the cliches of the genre, Covenant has always stood a head above the rest, due in part to Eskil's unique vocal quality and the band's tendency to steer away from the commercial trance sound of their peers. They have paved their own path, nicely situated between synthpop and good ole fashioned EBM. Skyshaper, released 2006, shows just how much these guys have matured over the years and left us fans desperate for the next release. Their tours are fantastic, and their attitudes towards fan just as much so - a real stand up act and a hard one to follow.

March 27, 2004
A relatively "mainstream" band, as far as the industrial underground goes. Their music ranges from synthpop, to ebm, to trancey industrial, to futurepop. Always dancy and with great vocals, Covenant are a good place to start when delving into this type of music.