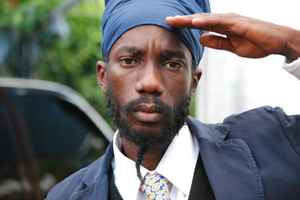 Real Name:
Miguel Orlando Collins
Profile:
Miguel Collins a.k.a. Sizzla Kalonji, a Bobo Ashanti dread Born 17.4.1976 in August Town/Kingston, Jamaica, made his first musical steps as a singer for Caveman Hi-Fi. His energetic singjay-style and spiritual lyrics earned him enthusiastic acclaim already with his 1995 debut album "Burning Up", while the 1997 follow-up "Black Woman & Child" was an international breakthrough, which brought Sizzla the 1998 MOBO award and a place in various magazines' top 100 albums of the year. At that time, Sizzla was part of the Phillip Burrel's XTerminator stable, touring with Luciano and other artist of the new roots&culture wave.

Sizzla is very prolific, even by Jamaican standards. Since 1995, he released over 30 albums and most likely over 400 singles. With such an enormous output, fans often complain about the mediocricity of many of the material, yet Sizzla again and again manages to surprise his listeners with a quality album after a few mediocre ones.

Especially after 2000, Sizzla aroused controversy with his lyrics in several ways. First, European listeners and gay-right organisations take offence at his partly homophobic lyrics. Second, Sizzla's explicit description of sexual issues in some of his tunes, as well as his reportedly extravagant lifestyle, led to a break-up not only with his Rastafarian ex-colleagues like Luciano, but also with the Bobo Ashanti order, whose elders repeatedly distanced themselves from Sizzla's music and lifestyle, while the later still considers himself a Bobo Ashanti member.

One of my favorite artists. Definitely recommend checking out https://x.co/coldheart