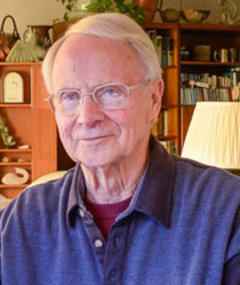 Profile:
Richard "Dick" Hieronymus (Born 1931 in Chicago, IL) is a composer, arranger and producer. At 8 years old he had his first piano lesson and at 9 was playing trumpet. By the time he was 17 years old in 1947, Dick had his own 10 piece swing band using the stage name Gene Richards. Right after graduating from high school in 1949, he joined the Jay Jaumotte Territory Band in Omaha, Nebraska. One year later he took music arranging classes at Roy C. Knapp school of percussion, where he met fellow student, Hal Blaine - the future L.A. Wrecking Crew leader.

Being drafted to the US army in 1951, he played trumpet in 264th Army band, Honolulu, HI with fellow Chicago tenor saxophonist, Johnny Griffin - "the Little Giant of Jazz". In 1954 Dick returned to Chicago a civilian, arranging music for the Jerry Fifer dance band. Dick's 1st recorded arrangement, “My Little Blue Book" by Jerry Fifer was released as a 78 rpm single on the Mar-Vel' label.

In 1955 he was in Miami, Florida playing trumpet at Leon & Eddies World Famous Burlesque Theater & later with The Jay Smith dance band at the Miami Springs Villas. 1959 found Dick in Hollywood, CA copying music for The Red Skelton TV show among others. He arranged the Christmas Show at the Riverside Hotel in Reno Nevada which lead to a solid career arranging show openings for Moro-Landis Productions “Most American Girls In The World” at The Sahara Hotel in Vegas and five other night clubs.

A few years later, Dick was hired as music director (18 musicians) at The Millionaire Club in Los Angeles (much later mid–late 1970’s this would become the famous Disco Osko’s, which was featured in the 1978 Disco comedy film, “Thank God It’s Friday”, and episodes of the TV shows “C.H.i P.’s” and “Wonder Woman”).

Later in 1967, Dick and Joe B. Mauldin (Buddy Holly's bass player) composed the instrumental “Prophesy Of Love” which was recorded by Tommy “Snuff” Garrett’s Easy Listening project The Midnight String Quartet on Viva Records. Snuff also recorded it on his “50 Guitars Of Tommy Garrett” album series.

As the 1960’s were coming to a close, Dick was hired at Dot Records as an in-house arranger and scored many records for them over the next several years. The first of which. Val Stoecklein’s 1968 cult classic album “Grey Life” and in 1969, Brian Hyland’s million selling album “Tragedy – A Million To One”. Many record arrangements, specializing in strings for different record companies followed through the next 15 years.

In 1971, a whole new direction of composing and arranging began for Dick which would shape the majority of his career for the next 17 years. Film and television music was on the horizon, beginning with being hired to score the short comedy film “Frog Story”, which won an academy award in 1972 and was the acting debut of future TV and film actress Pamela Susan Shoop.

Following “Frog Story”, Dick was both music supervisor and original score composer on a series of biker movies for Roger Corman and Johnathan Demme including “Angels Die Hard” and “Angels Hard As They Come”. By the mid 1970’s in between producing and arranging for commercial Pop and Country music records, other film scores would follow including a long working relationship with cult film writer/director Don Jones.

Around this same time, Dick was the composer of original songs for the educational Metric Man cartoon and live action series. This included the release of 2 albums of songs in 1975 from the series. One of which, “I Weigh With Kilos” (written with Jimmy Vann) was sampled in 2007 by rapper Ghostface Killah from Wu Tang Clan on his song “Kilos”, making the younger Hip Hop generation aware of Dick Hieronymus.

In the late 1970’s, Dick began writing and recording a large body of instrumental library music in the Disco, Funk and Easy Listening genres featuring his signature sound. Today this library music has become very sought after by DJ’s and music collectors alike. Only 2 complete albums worth of some of this music ever made it to obtainable to the general public vinyl LP’s through the long out of business Robert Hall Productions/New World music library back in 1978.

His other library works were available mostly on tape reel only through his own Bosch Music Library (also known as Hieronymus Bosch Music Library) which ran from 1977 - 1988. Some select library cuts made their way uncredited to Dick onto a 1979 NFL Films Music Library vinyl LP. Much of Dick’s library music can be heard in several NBC and CBS produced TV shows/specials of the late 1970’s through the mid 1980’s. In between making library music at this time, Dick arranged a small handful of Country Music albums for artists on Curb Records including Hank Williams Jr. and Susie Allanson.

In the beginning of the 1980’s Dick continued working in arranging commercial records and composing film scores. 1982 was quite a busy year with the scores for the Don Jones cult Horror classic “The Forest”, the made for cable movie “Balboa” starring Tony Curtis, and the teen comedy film “Goin’ All The Way”.

Which on the soundtrack album of "Goin' All The Way" saw the first time commercial release of Dick’s sought after 1979 Disco tune “Ask Me To Dance” by singer Sassy Alan. The tune originally gained attention in late 1980 after being used in an episode of the NBC sitcom “The Facts Of Life”, which the tune is still a cult favorite to this day.