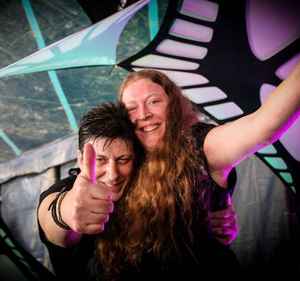 Profile:
Paul Baguley and Sonya Bailey have been producing electronic music as ManMadeMan since 1994, operating in both the commercial and underground dance scenes.
Their recording studio is often credited as The Tetrapod.

Both artists came from completely different musical backgrounds. Paul was working with bands and Sonya was a wayward young girl with a keen ear. Coming together they partied hard at some of the most legendary events back in the early days, Cripps Barn, Dragon Fly, The Fridge, The Rocket and Space Hopper, the club that launched them. It was these experiences that inspired them to create music within a scene that was totally different from anything they had been involved in before.

And so MMM was born: one EPS 16+ and away they went, until they had a live set. Whilst playing in the clubs where they had partied in earlier days, DJ Tsuyoshi Suzuki heard them and soon after they released their first single. Later they released their first album and followed this up by gigging around the world. This led to meeting loads of new people who were starting labels and soon they were releasing music globally on many record companies throughout the industry. They signed up with Concord International and found themselves supporting the Shaman in 1996.

Together they worked alongside many producers and have played at a wide range of events across the world. In the summer of 1996, China Records approached them for an album deal. They were then working with the producer of many hit records including Bruce Willis' "Under The Boardwalk". This led to their releasing tracks alongside U2, Massive Attack, Fatboy Slim, The Chemical Brothers, Leftfield and many other renowned artists, and they found their music being remixed by chart-toppers such as KarmaSutra.

Manmademan have been on the play-lists of Judge Jules, Pete Tong, Sasha, Digweed and other leading DJs. They have fiercely held on to their independence by retaining all rights to their publishing.

Today the studio consists of a Mac G5 and numerous analogue synths as well as a plethora of virtual synths. Logic Pro is used for sequencing, a far cry from their old Atari. Having two children during the last four years has brought many new things to MMM. It has been a learning experience and one that has cut both ways: making music through the night and then doing the school run isn’t always conducive to making trance. Yet they have never given up, showing an unerring dedication to the scene. Hard to pigeonhole, they can turn their hand to many types of music but trance is where their hearts lie.