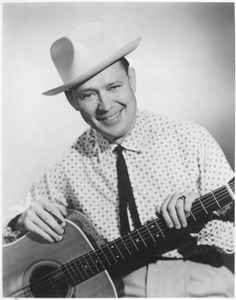 Profile:
American country singer, musician and songwriter, born April 29, 1909 on a farm near Berea, Kentucky and died October 28, 1979 in Hendersonville, Tennessee.. Moved to Hamilton, Ohio in 1926. The Hamilton-Cincinnati area was to be his home for most of the rest of his life. In the 1950s, no one was more popular in the Cincinnati area. In fact, in 1951 he was voted the fifth most popular artist nationally in Country Song Roundup, behind only Hank Snow, Hank Williams, Ernest Tubb, and Eddy Arnold. He was part owner of the record store in downtown Cincinnati that bore his name, and where he broadcast live daily for WNOP in Newport, Kentucky. He recorded on three major record labels: Capitol, Decca, and Mercury. He recorded three Billboard top-10 records: “I Found My Girl In the U.S.A.,” “What Makes a Man Wander,” and “Dark Hollow,” in addition to seven other top-30 records. Other labels for which he recorded included Red Barn, Radio Artist, Starday, Rich’R’Tone, Vetco, Country Corner, Stop, Sims, Brite-Star, Prize, Wel-Dun, Jewel, and Blue Grass Special. Some of the artists he helped in the music business included Rusty York, Connie Hall, the Davis Sisters, Joe “Cannonball” Lewis, and Roy Moss. Mainly a country blues singer, in later years he recorded quite a bit of bluegrass and wrote the enduring bluegrass standard “Doin’ My Time,” as well as “Don’t Give Your Heart To a Rambler,” “You Don’t Know My Mind,” “A Born Ramblin’ Man” and many others. The IBMA honored him with a Distinguished Achievement Award in 2004.
Sites:
hillbilly-music.com, cindaybluegrass.wikidot.com
Variations:
Viewing All | Jimmie Skinner
J. Skinner, J.. Skinner, J.Skinner, Jimmmy Skinner, Jimmy Skinner, Skinner, Skinner Jimmy