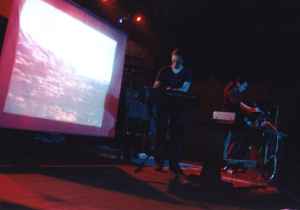 Profile:
The members of this Russian duo, MK [keyboards, music, sampling, market rituals] and LM [drums, programming, sound engineering, electronic manipulations] reside in Moscow and have been involved in electronic music since 1997.

They met in 1998 and formed Cyclotimia shortly thereafter with the purpose of making experimental music together. They have subsequently become one of the most respected and well-known Russian projects in the electronic scene today.