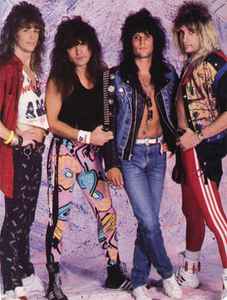 The band was formed in 1984 by Guitarist Robert Sarzo, and Bassist Tony Cavazo. Cavazo, former Quiet Riot and Snow bassist, was introduced to Sarzo by the late Quiet Riot frontman, Kevin DuBrow in the early 80ʼs. DuBrow suggested they put a band together and they did just that. Cavazo and Sarzo being the siblings of the classic Quiet Riot lineup guitarist and bassist Carlos Cavazo and Rudy Sarzo, decided to create a monster.
They recruited singer Kelly Hansen and drummer Jay Schellen and hit the ground running. With little label interest, the band decided to release a mini-album themselves, Take What You Want. The album and constant touring led to them getting a major label deal. In 1986 & 1987 they opened for Christian metal band Stryper on their To Hell with the Devil album tour. They were soon signed to Enigma Records, the same label as Stryper.
In 1988, the band released their major label debut album, Over the Edge. In 1989, Sarzo left the group and was replaced by ex-Lion guitarist, Doug Aldrich. This lineup recorded the album Slave to the Thrill, which was released in 1990. In 1991 Schellen wrote, recorded and toured extensively with both Unruly Child and Sircle of Silence while Hansen did a considerable amount of session work. Schellen suggested that Hansen help with the recording of Unruly Child’s second release, and shortly after they agreed to resurrect Hurricane. In 2010, Robert Sarzo and Tony Cavazo, founding members, reunited and recruited singer Andrew Freeman and drummer Mike Hansen.
Members:
Doug Aldrich, Jay Schellen, Kelly Hansen, Robert Sarzo, Tony Cavazo
Variations:
Viewing All | Hurricane (9)
ハリケーン