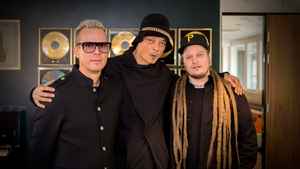 Profile:
The Bomfunk MC's are a Finnish breakbeat hip hop group, consisting of rapper B.O.W. (known sometimes as B.O. Dubb), DJ Gismo and producer JS16. B.O.W. and JS16 had previously collaborated in the group "Soup De Loop", which had split after the departure of its female vocalist Mari Vesala. The group's music rooted in the rapped vocals of B.O.W., but crossed genres such as drum and bass, techno, rock and straight-ahead hip hop.

"In Stereo" was their first album and they admit the style was reached unconsciously. The album was number 1 in Finland (their native country) selling more than 100,000 copies, and reached good entries in many European charts. The album includes tracks such as "Freestyler" (90,000 copies sold in Sweden), "Uprocking Beats" and "B-Boys and Flygirls", where jungle, rap and funk are mixed. Unusually for a band from Finland, the group enjoyed some success in the UK (although for unknown reasons, "In Stereo" was their only album to be released there).

The group's second album "Burnin' Sneakers" had more limited success than "In Stereo", not being released outside Northern Europe. The single "(Crack It) Something Goin' On" (featuring Jessica Folcker) was the official song for Sweden in 2002's FIFA World Cup, which gave the group some wider recognition. Their third and currently final album "Reverse Psychology" had a change to the lineup, as DJ Gismo departed the band and the members of SkillstersPlusOne joined. As a result of the lineup change, the album features less of a breakbeat sound to the others (although it is still present on a few tracks), being more of a mid-tempo album with more collaborations. The lead single "No Way In Hell" was quite popular in Europe, but follow-ups "Hypnotic" and "Turn It Up" were less so, with the latter only receiving a promo release.

The group went on an unannounced hiatus in 2005, primarily due to B.O.W.'s desire to be out of the spotlight. However, the original lineup reformed in 2018, and performed some shows in Finland in 2019. This year marked the first vinyl release of "In Stereo" as well. The group has not ruled out the possibility of new material.

This band is definitely the most pop-looking :) music ever evolved from the beautiful electro culture... The most stupid freestyle tracks with nasty lyrics about unconditional love and sorrows are better than this scrap. I was laughing till death when I heard their interview to MTV when they said something like "...we're the only band which continues electro-scene in Europe." Yes that's the real sense of humor…