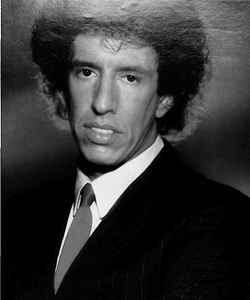 Real Name:
Richard Van Perry
Profile:
Son of music educator Sylvia Perry. After touring as bass vocalist for The Escorts (10), in the late 60's, throughout the 70's all the way through to the mid 80's, Richard Perry moved away from performing and began producing other artists - such as his late 60's co-production with Bob Krasnow on Captain Beefheart And His Magic Band* - Safe As Milk .

Over the course of his career, Perry put his signature production style on albums by acts including Art Garfunkel, Diana Ross, Harry Nilsson, Carly Simon, Ringo Starr, Barbra Streisand and the legendary Ella Fitzgerald, to name a few.

As he continued to have success producing tracks for artists, in 1978 Perry started his own label, Planet (15), as a vehicle for him to nurture new and existing artists, the most successful of which was the multi-platinum selling Pointer Sisters. Planet Records was based in Los Angeles but Planet Records Germany followed soon thereafter as a vehicle to distribute his American label's artists to the European markets. Following on the heels of the Pointer Sisters' quintuple platinum album "Break Out" - the label's most successful release - Perry sold the label to RCA in 1983.

After the sale of Planet Perry continued to produce artists, some of whom he had exisitng relationships with and some of which were new endeavours (Patti LaBelle, Donna Summer) for Perry. While his pace has slowed down some from his heyday in the 80's and 90's, Perry continues to produce artists today and shows no sign of quitting any time soon.
Sites:
richardperrymusic.com, Wikipedia, repertoire.bmi.com
In Groups:
The Escorts (10)
Variations:
Viewing All | Richard Perry
Perry, R. Perry, R. Terry, Richard Pery, Richard Porry, S. Perry