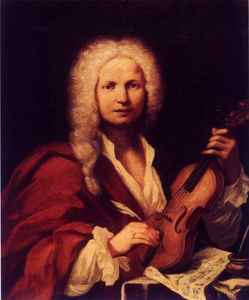 He is recognized as one of the greatest Baroque composers, and his influence during his lifetime was widespread across Europe. He is known mainly for composing many instrumental concertos, for the violin and a variety of other instruments, as well as sacred choral works and more than forty operas. His best-known work is a series of violin concertos known as "The Four Seasons".

Vivaldi's career as a violinist and composer was almost inevitable. His father was Giovanni Battista Vivaldi, a founder of the Sovvegno dei musicisti di Santa Cecilia, an early musician's collective, who's President was the Baroque operatic composer and tutor Giovanni Legrenzi. As a youth, touring and performing around Venice in accompaniment on the violin with his father, he is likely to have been influenced by Legrenzi who had become maestro di cappella at St. Mark's Basilica in 1681.

A redhead like his father, Vivaldi took up the course of attaining a priesthood in 1693 and became ordained in 1703, referred to by those around him as "Il Pretto Rossi" because of his red hair. By late 1703 he was unable to maintain his practice in the priesthood due to ill health and sought employment as a tutor of music, retaining his reverential title.

By 1704 he worked as maestro of violin in Venice at the orphanage of the Devout Hospital of Mercy, an institution known as Conservatorio dell'Ospedale della Pietà, providing shelter to orphaned and abandoned children. Here the boys were taught a trade, whilst the girls were given a musical education. The talented were selected for the conservatory's orchestra & choir, which gained high regard both in Venice and abroad. Vivaldi used this period to write the majority of his concertos, cantatas and arias.

The institute provided an ideal environment for Vivaldi to explore the avenues of the ritornello form. The first of his works were published in 1705, a second Opus in 1709. His third Opus was published in Amsterdam in 1711 and gained him enthusiastic attention throughout Europe – followed by a fourth Opus in 1714. He became Musical Director of the Pietà's institute in 1716 and was contracted to provide two concerti a month for the orchestra. Papers from the Pietà's history show that Vivaldi produced 140 concerti between 1723 and 1733.

In 1714 Vivaldi took on the role of impresario of the theater Sant'Angelo in Venice, presenting "Orlando finto pazzo", "Nerone fatto Cesare" and, despite earlier censorship, "Arsilda Regina di Ponto" in which the female lead (Arsilda) falls in love with another woman (Lisea), who is disguised as a man. Vivaldi's operatic style caused both outrage and acclaim. For three years he produced operatic work for the governor of Mantua, Prince Philip of Hesse-Darmstadt. He then moved to Milan and then Rome in 1722, performing for Pope Benedict XIII. It is in this period that he consolidated what was to become one of his most popular works "The Four Seasons", eventually published within a collection of twelve compositions "Il Cimento dell'armonia e dell'inventione" in 1725.

Vivaldi had moved in high circles at this point, writing a wedding cantata for Louis XV and "La Cetra", a dedication to Viennese Emperor Charles VI who knighted the composer and invited him to Vienna. By 1730 Vivaldi's style and popularity had waned and he sold up much of the rights to his work and relocated to Vienna, accompanied by his father. He took residence in a four-story house known as "Satlerisch Haus" (saddle-maker's house) ran by Maria Agathe Wahler, the widow of the saddlemaker. The property was situated above the Kärntnertor, one of eight fortification gates surrounding Vienna, close to the Kärntnertortheater where Vivaldi began to stage operas such as "Farnace" in 1737.