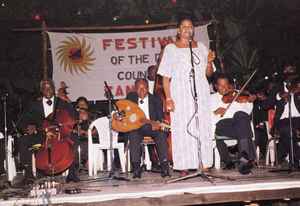 Profile:
The Nadi Ikhwan Safaa (also known as "Malindi") is a Zanzibarian Taraab orchestra. It was founded in 1905 and Zanzibar’s oldest orchestra.

Nadi Ikhwan Safaa (Malindi) Musical Club, was founded following the Sultan’s intention to create recreational associations on the island. The name itself means “brothers who love one another”, and reflects the egalitarian and supportive aims of the club. The Club has been one of the main currents in Zanzibari music throughout this century – sales of their cassettes used to comprise the bulk of the cassette copy-shops’ trade. After the revolution in 1964, the name was changed to the Malindi Musical Club and affiliated to the local Party branch, but it is now reverting to the original name. This means that its orchestra is currently known by either name on the island.

After the revolution, the club became open to women members. In their clubhouse where the members meet regularly to rehearse is a store room for the instruments, and a long room lined with pictures of the Club’s history. The Club has visited Kenya, Burundi, Oman and Dubai, and recently performed in the UK at the Music Village Festival in London during 2002.

Ikwani Safaa is Zanzibar’s premier Musical Club. Celebrating their 99th anniversary in 2004, this gathering of hobby musicians from all walks of life is still going strong. Here is taarab in its original beauty – delicate poetry, outstanding vocal performances, which reveal in their elaborate ornamentation the close connection to their Arabic roots, and finely chiseled instrumentals
Variations:
Viewing All | Ikhwani Safaa Musical Club
Ikhwani Safaa, Ikhwani Safaa Musical Club Of Zanzibar