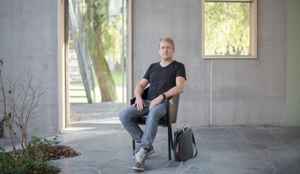 “The secret lies not only in the nature of the reagents, but in the way you mix them”. This ancient quote could make us easily think about something related to magic or even cooking, but it fits very well in all forms of art – which means that, in terms of music, the technological advances and the quality of the equipments won’t be enough to generate a good tune. Well, not at all, until you get someone really committed to essence of his artistic Soul – someone like Fabrice Lig. "I mainly use analog equipment, mixer, synthesizer (Juno 106, SH 101, TR 909, Synthex Elka, Microwave, Moog Source, Pro One, Matrix 1000...), effects...but also the useful things into digital world...Cubase, AKAI S 5000 (sampler), some Virtual synthesizers and effect too. But Digital equipment is more a tool to go further into my ideas than to create sounds. I like that way of working. You keep the old warm sound and fun of analog equipment, but go further into the control of the sound, into recordings thanks to digital technology", claims the Belgian artist concerning the production methods.
The talented producer represents a huge example of forward-thinking mind to all this new generation of computer software producers. His musical background is something to be respected, as he passed through the main dance music movements, from Break Dance to the House of Chicago and mainly the Techno from Detroit. This last one became his strongest influence to his career, which certainly may explain the large use of typical atmospheres, melodies and rhythms, similar to the ones of the Motor-City producers – a so brilliant use that he finally was considered part of the Detroit musical culture itself, and became the first white soul to release through a Detroit Techno label.