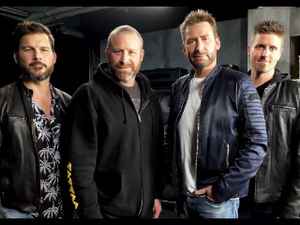 April 9, 2021
Buttrock has never been so obviously oblivious.

If you don't understand why people dislike them:

They're immature, sellouts and a disgrace to Canada's 90's musical repertoire, with bands like Sloan, Limblifter, Pure and hHead being far better examples of Canada's massive and largely forgotten music scenes had to offer.

Crappy lyrics, but they make some pretty good instrumentals though.

March 21, 2019
Okay, i'm going to be the mediator in this comment section.
Nickelback, aren't that bad of a band. There, I said it. Do they play it safe? Most of the time. Do they aim for radio mostly? Yes, but honestly, it's better then most stuff I've heard on radio anyway.
While a lot of Nickelback's albums only have a few good songs on them, those few songs prove that the band does have talent. they just choose not to use it. Take "Just To Get High" from Dark Horse. That is their worst album (in my opinion), but that song is actually really good. Heck, they even have a few mostly solid full albums. I'm looking at you, The State and Feed The Machine.
Personally, although I like much better bands, I keep going back to not all, but some of Nickelback's music. If I want smart and thought provoking music, I'll turn elsewhere, but if I just want to rock out in my basement, I may spin a Nickelback record on my turntable.
It may not be mind blowing, but I find pleasure in their music. I shouldn't have to justify my tastes to anyone, and you shouldn't have to either. Besides, i'm not going to make you listen to it if you don't want to.

In conclusion, Nickelback aren't amazing, but they have shown that they do have talent, and even though they may not be that creative, they have some good tunes that I can rock out too.

I rest my case.

February 28, 2015
Amazing band, been a fan since I was a kid and I will continue being a fan always! These guys have made a huge impact in my life and have been a major inspiration to do so many things. Keep rocking you guy!

January 2, 2015
These guys are great on their first two albums. Their third album has the charm of the second with a bit more heavy production and less imaginative music. Their fourth album is when they begin to lose touch with reality. Guys! We need you back in with the sane artists out there!

October 25, 2012
The butt end of many jokes these days, and for good reason, have a listen to their music. One of the finest examples of the poor taste of the masses.

The only thing that these guys are lacking is puffy hair. With that, they could potentially turn into Poison or Cinderella of alt-rock. Actually, i could hardly call it alt-rock or hard rock, but rather i see it as a new generation of bands in so-called crap-rock genre. Whereas Staind who also belong to that genre are known for overblown balladry, Nickelback are known for lame attempts to sound tough or emotional (depending on particular song). Cut down on unnecesary pathos, guys, and try to play decent music, once in a while.