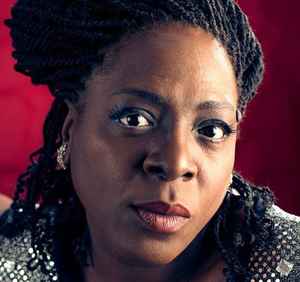 Born in Augusta, Georgia, raised in North Augusta, South Carolina, moved to Bedford-Stuyvesant, Brooklyn, New York, in 1960. Began performing in 1970s. Also worked as prison guard at Rikers Island, New York, in the late 1980s, and then as an armed security guard for Wells Fargo. Discovered by Gabriel Roth at a 1996 session backing the soul singer Lee Fields. And began recording with Roth for Pure Records (6), Desco Records and then Daptone Records. Her debut album was 2002's Sharon Jones And The Dap-Kings* - Dap-Dippin' With..., which was Daptone's first album release. In 2013, she was diagnosed with stage 2 pancreatic cancer. Returned to performing in 2014. The cancer returned in November 2015. Subject of the 2016 documentary "Miss Sharon Jones!"
Sites:
Wikipedia, Wikipedia, repertoire.bmi.com
Aliases:
Lafaye Jones, Sheron Lafaye
In Groups:
Sharon Jones & The Dap-Kings
Variations:
Viewing All | Sharon Jones
S. Jones, Sha Jones, Sharon

October 13, 2018
Sharon was one of the true modern day Soul singers that sang with passion rarely seen today,
She came from humble beginnings and sang in church to gospel music also imitating the soul singers of her youth.at home with her siblings.
This is a model that you do not hear very often today, but most of the great soul singers first started singing in church.
I would look out for her new releases because there was always something special in her songs that i could relate too.
I am sure the funk and soul industry feel that we lost her to soon, She set a benchmark that acoustic music and real live singing could be still popular with today's youth.
Kids today maybe singing and dancing to her music will become future talent because good music never dies "Sharon we miss you because your music touched our hearts"
Rest in peace god bless you from one of your fans.