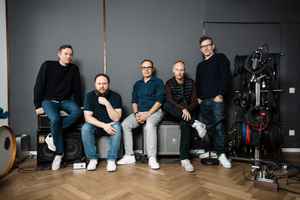 Started as a DJ team in 1995 and moved on to production in 1996. In 1998, they founded a collective (a formless group of musicians, producers and DJ's) as well as running and operating a label, both under the name Sonar Kollektiv.

September 27, 2021
I went to a festival just to see the band, in 2020 i went to their label birthday party in berlin - that was the best party i have ever went to! And i am going to see the band here in czech too. Wo weee! Jazzanova & Sonar Kollektiv are my number ones when it comes to music and i have quite eclectic music taste :)
Reply Notify me 3 Helpful

Jazzanova (and their label Sonar Kollektiv) is the common denominator of what beats and sounds and sophisticates. How they, just as an example, turn an acapalla like 'song of will' into a symphony of nu-jazz (what's in a name?) is unbelievable. But, just believe it: from old germany jazz to happy fat freddy's drop, there is no way to escape quality unless you want to run away from Jazzanova.

December 23, 2003
Where must one start? Jazzanova are, undoubtedly, one of the most important dance/electronic projects of the last ten years, tagging, like no others before, the so-much dreaded "nu-jazz" tag. They, along with record label Compost (for which they record and own their own sub-imprint, Jazzanova Compost Records, or JCR), set the template for most of the black music rooted dance/electronica that has been being made in the past couple of years. They were also one of the first ptojects to bring some world music awareness to dance music, bringing in elements of Latin and African music and, in the process, showing that dance music itself is something that almost exists since the dawn of times. But, in truth, Jazzanova are a very eclectic bunch, and they are as capable of making Latin-influenced jams, as well as very electronic-sounding 4/4 house joints. All in all, Jazzanova prove that knowing your music (and especially, knowing it in very different styles) can be important by the time you create your own thing.
And, of course, let's not forget that Jazzanova, along with Kruder & Dorfmeister, also brought the art of remixing to a new and refreshing stage. In many cases, their remixes are so much that as almost new creations in themselves, sometimes completely turning the original tunes upside down. In some cases, that approach can even turn what was originally dull and turn it into a dancefloor stomper or a great chill-out vibe.
In short: Jazzanova is an essential name for anyone who likes music. Any kind of music, really.
Reply Notify me 12 Helpful