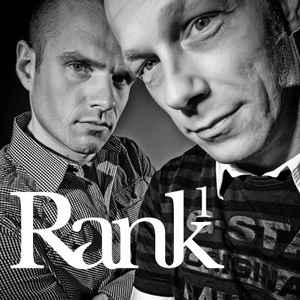 Profile:
Rank 1 is a Dutch electronic dance music DJ/producer duo founded by Piet Bervoets and Benno De Goeij in 1999, following a new record deal. They originally met in 1997 and have been producing together ever since. The duo is known to perform live on stage together from time to time, utilizing keyboards and laptops to play their tracks on the spot. Rank 1 has been responsible for various theme tracks and anthems to large indoor Trance events in the Netherlands as well as Poland: "Airwave" (Innercity 1999, NL), "Such Is Life" (Sensation 2001, NL), "Beats At Rank-1 Dotcom" (Trance Energy 2005, NL), "L.E.D. There Be Light" (Trance Energy 2009, NL), "Symfo" (Sunrise Festival 2009, PL) and "The Great Escape" (Entrance 2010, PL) were chosen to represent these events.

My favourities from Rank 1

February 17, 2014
Summer 2004 acquainted me with the name “Rank 1” through “Beats At Rank-1 Dotcom”: that warm reverbed synth lead instantly captivated me being so weird and cool at the same time! It was the start of a nearly decade old journey and fandom, educating me on various styles as the years passed by. It wasn’t until 2008 that I dove deep into their early discography and discovered the sound that brought them their fame to begin with. Even though their post-2003 discography isn’t half as nostalgically remembered as those first four years, in my humble opinion it is a 1000 times more diverse and sexy than their 138+ days.

If you want funky Electro beats, check out “And Then…”, either version of “Life Less Ordinary” or “This World Is Watching Me”. If you want relentless Tech Trance or Techno-ish vibes, listen to “Top Gear”, “Beats At Rank-1 Dotcom”, “Down From The Deep” or their remixes for “Cosmic Gate - Analog Feel”, “Cosmic Gate - Fire Wire” “Mr. Sam - Lyteo”, “ATB - Humanity”, “Marcel Woods – On Fire” or their very own “And Then… (Rank 1’s Minimal Progressive Techno Electro Trance Mix)”. If you prefer your Trance with a modern Bigroom edge, you can count on “L.E.D. There Be Light”, “Symfo” and “The Great Escape” to blow you away. Heck, even vocal lovers can get their kicks with Rank 1 sounds through the Trancey “Witness” and Trousy “Wild And Perfect Day”, both slightly poppier than previous Rank 1 vocal tracks. But perhaps their best tracks are the self-explanatory ones: “Opus 17”, “7 Instead Of 8” and “13.11.11” are each mesmerizing Trancers with a unique twist, be that through a Soul-enriching triple-fold returning sad melody, an unusual time signature or an extraordinary high-concept execution in which title = (reversed) release date = track length = BPM.

Productions not enough for you? Then how about Piet's energetic and eclectic sets which always feature some unknown / unheard gems? Or his nostalgic Classic sets full of energy? The Rank 1 mix compilations have a lot to offer as well, a personal favourite being their "High Contrast presents Rank 1" mix: melody, groove and energy blended into an exotic whole honouring the diverse spirit of 2008. Their Radio Rush radioshow since April 2010 has done a good job at translating the sound of their productions/mix compilations into a monthly format and get this: since 2013 the 2nd hour of their show offers a guestmix spot for new (bedroom DJing) talent! How many Trance Legends do that with their Radioshow huh? These are all valid reasons to love Rank 1 but I think everyone that has ever considered themselves half a Rank 1 fan will agree that it’s their live performances that make this duo stand REALLY stand out. Like Raijin below me wrote: check these guys out when they go live. Whether at Trance Energy 2000, 2002, 2005, 2009, Sensation 2001, EDC Las Vegas 2012, Sunrise Festival 2008, 2009, 2012, Dance Valley 2010 or Armin Only 2006: these guys ALWAYS rock the house! And if you’re lucky you might just catch an exclusive unreleased Rank 1 track too!

There are only two things missing in these guys’ career if you ask me: A six hour Rank 1 Only event in the Amsterdam ArenA (or Jaarbeurs Utrecht) and a follow-up to that Timeless Trance Classic of a “Symsonic” album from 2002. If they deliver at least the latter, I can die a happy fan.
See 2 replies

A great trance act with some serious anthems under their belt. Virtually every trance head has heard "Airwave" and DJ's of every caliber are giving alot of play time to their new track "[email protected]".

While their production skills are impressive, their greatest strength lies in their Live PA. It's one thing to create beats and SFX live, but it's another entirely to create complex, sweeping melodies on the fly. See them live, they're incredible.

March 9, 2004
Although Rank 1 produces trance with a typical dutch "cheesy" trance sound at first sight, I really like their album Symsonic. It shows these guys know how to build up a trance track, and the melodies in it are of such a good composition it makes me get goosebums (especially in "conspiracy", "airwave" and "such is life". The tracks on the album vary from hardtrance to melodic trance to downtempo relaxing stuff. Together it makes a very good trance album, although I would have liked to have a instrumental trance version of "such is life" and the original version of "airwave" on it. Listen and float away...