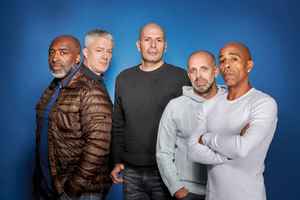 Profile:
French Hip Hop crew from Marseille, formed in 1989.
By the early 90’s a number of rap stars such as NTM and MC Solaar had emerged from the Paris suburbs and started making their mark upon the French music scene. Meanwhile the multi-cultural town of Marseille, in the South of France, was proving to be fertile ground for a second wave of the rap movement, spearheaded by the group IAM (pronounced as English "I am").

In the beginning the group was born in 1984/85 when rapper Akhenaton and DJ Khéops performed under the name of "Lively Crew". In 1988 the group's name was changed to "B Boys Stance".
One year later Shurik'n, producer Imhotep, dancer Kephren and Freeman (3), a dancer who started to rap, joined them. The name of the group was changed again - and so in 1989 IAM (Imperial Asiatic Men) was born.

They autoproduced a cassette named "Concept" that swiftly spread their name and their fame in the whole town. This tape became kind of mythic and within a short time every youth had heard the name of "IAM".

In the following years IAM produced five very successful albums. For 2013 the upcoming album "I AM Legend" is planned in collaboration with Ennio Morricone.

Freeman (3) officially left the group in 2009.
Since a long time Said is always seen together with the group. He performs with them on stage and in the studio and sometimes he is mentioned to be the sixth member of them.
Sites:
iam.tm.fr, Facebook, genius.com, imdb.com, Twitter, Wikipedia, YouTube, YouTube
Members:
Eric Mazel, François Mendy, Geoffroy Mussard, Malek Brahimi, Pascal Perez, Philippe Fragione
Variations:
Viewing All | IAM
I AM, I Am, I'am, I.A.M., Jam, jam, アイ・アム