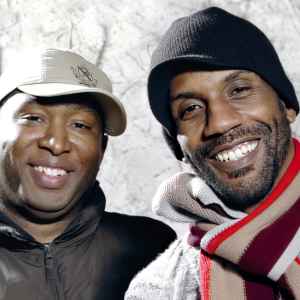 Since the early 1990's, 4hero have influenced many styles under many monikers; from jungle to drum'n'bass, from hip-hop to techno. The genre "broken beat", it could be argued, was virtually created off the back of their album "Two Pages" (1998).

They have also produced for many artists large and small, including the likes of Jill Scott, and Ultra Naté, et al.

September 18, 2022
Probably one of the most important British underground dance music duo's of all time. They created genres, helped shape artists careers and blessed the dance with untold gems all across the BPM range. Architects.

Through Tom & Jerry, Jacobs Optical Stairway and 4 Hero itself, not forgetting Dego's current 2000 and the black family, these guys have been a source of consistent, visionary, dance music that is deeply rooted in the UK and a reflection of their authenticity and pioneering approach. True legends and total respect.

If you listento the side B of 4 Hero's first release from May 1990 (Rising Sun), and compared it with tracks from their most recent album ("Play With The Changes", 2007), you'd think that it sounds like a perfect link, like the band had been true to their flavour and honest and authentic to their sound for so many years. But boy would you be missing a lot of what happened in between !!!

4 Hero is simply one of my 5 fave artists of all time, any genre considered. Not exactly 4 hero, the band, but rather the ensemble of permutations that these two producers..skip that I prefer the term "compositors", Marc Mac And Dego (as they seem to prefer being called) have employed over the years to cover for their experimentations with a wild array of musical genres, from good old rave techno to drum and bass to cosmic jazz to nu soul, hip hop and whatnot.

The first four ep from 4 Hero released on their own label Reinforced in 1990 were already experimenting with fast breaks at the time when most artists and labels who have been pretending to be at the core of the then slowly emerging "jungle" and drum and bass scene were not yet, well, technically existing as far as publishing is concerned.

Whatever was their musical influence was at the time, I think that by pretending to humbly participate in the general rave scene, 4 Hero and Reinforced actually were developing their own scene without even realizing it, and as soon as that new scene was getting by itself, 4 Hero were already exploring new territories, like they did since their first album in 1991, and are still doing these days, if you manage to lend an ear to the myriads different projects that they keep unleashing each year,
pershaps somewhat to make certain that they remain cool forever. 4 Hero are perhaps geniuses, it takes another genius to tell and that's not me, but they're certainly visionarists, "artists" to the core of the word, and invariably talented.

The English duo composed by Dennis ‘Dego’ McFarlane & Mark Mac Clair is an essential chapter on the history of electronica. They both were behind other amazing projects such as Broken Beats driven Dollis Hill and Jacob's Optical Stairway, as well as the Old School Hardcore touch of Tom And Jerry or more experimenting ones such as Waterproof.
Capable of releasing high quality music of different genres, they released “Mr. Kirk’s Nightmare” legend, released on Combat Dancin' EP in 1990 – a tune that literally stood the test of time as a massive hit. As if it wasn’t enough, after the eclectic repertory of In Rough Territory (1992), they released the Long Play reputated among the best Drum n’ Bass albums ever – “Parallel Universe”, at the end of 1994, antecipating a bolder & wilder perspective for the realm of Break Beats, with huge Jazz & Soul influences. While Dollis Hill’s "Desist" Da Black’ was included on Metalheadz special five piece Box Set with an ahead-of-its-time experimental approach for Broken Beats, Jacob's Optical Stairway brought the upcoming parameters for the Drum n Bass & Break Beat scenes with a futuristic, sophisticated and experimental elements on R & S, constituting one of the Belgian label’s great standards of that period. “Golden Age”, a beautiful Techno tune with clear Detroit influences is another evidence that 4 Hero’s works are absolutely impossible to classify. They are also at the origin of the myth & mighty label called Reinforced Records.

November 30, 2003
4 Hero are one of the ultimate essential names when it comes to electronic music of some sorts. They were in the cutting-edge when the hardcore sound was evolving into jungle, creating one perennial classic in the form of "Mr. Kirk's Nightmare". They were responsible for the first "proper" drum-n-bass subgenre album, when they released the almost visionary "Parallel Universe" in 1993. Since then, almost every single release of theirs in their various guises (together, solo or with other people) have been in the forefront of something, especially the ever-so-confusing broken beat. I dare say it: 4 Hero are geniuses and their name shall be remembered through the years, even if they won't succeed on a mainstream level.

April 9, 2003
This has to be one of my favourite dnb groups for a long time, 4 hero are just interesting. Their 2 Pages really opened my eyes to new soul/jazz/drum n bass. I used to like them when they were a rave duo, but I feel they have progressed well into a new age jazz group. Tracks like Escape that and Star Chasers really get me in the mood to chill out. Older tracks I like a lot include Mr Kirk's nightmare - what a classic? And who really can forget that sample "Mr Kirk, your son is dead", it still rings in my ears today.... and that bassline.....

Even as Jake's Optical Stairway and Nu Era, the pair have always been great. If you have never heard 4 hero, I suggest getting hold of two pages, you'll be mesmorised - though if you like hard on dnb, listen to disc 2.... amazing.

January 18, 2002
For about three years now, I have come to love this '4 Hero' for their alternative 'jazzy-tech' sound. A little research showed me that these guys were more than just DJ's or 'remixers', they have preserved a period of time in music before the onslaught of exploitation and the "video age".Being from the UK, with a population that shows more appreciation,it's easier for them to promote the very roots of modern soul and jazz music, while at the same time cleverly creating a new musical sound that combines and trancends classical,hip-hop, jazz and R&B.